Omicron Covid-19 new variant has come with a spike in cases, but it remains to be seen how much it will affect South African hospitals. New Covid-19 infections have jumped from about 200 a day last month to more than 11,500 on Thursday. 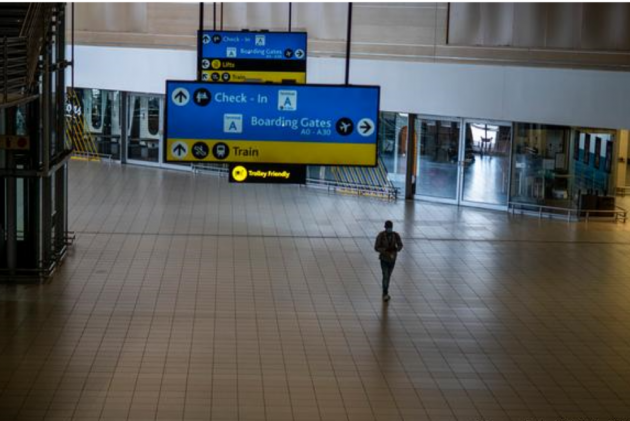 Kirst Dalton had her gym slot already booked. But then she discovered her Covid-19 test from the previous day had returned a positive result.

"I could drastically feel that I was not OK. And my other half was having a raging fever of nearly 39 degrees," the 32-year-old woman told DW.

"It's been a rough six days but I'm hoping we're coming out of it. We fortunately haven't lost our taste or smell, which is one of the key things of the omicron variant, if that is the variant we have," she said.

For Johannesburg residents like Dalton, a Covid-19 infection these days almost automatically means the omicron variant.

All over South Africa, Omicron Covid- 19 new variant — which the World Health Organization has labeled as a "variant of concern" — now accounts for some 88% of identified infections.

Just as many African countries appeared to have gained control over the pandemic, omicron appeared in southern Africa — and has now raised concerns of a fourth wave.

"In Africa the detection of omicron variant is coinciding with a 54% surge in COVID-19 infections," said the WHO's regional emergency director, Abdou Salam Gueye.

"It should be noted that it is mostly in southern Africa. While new Covid-19 cases are rising in southern Africa, they have dropped in all other sub-regions during the past week compared with the previous week."

South Africa most recently recorded around 11,500 cases in one day. Omicron cases have also been found also in neighboring Botswana, Mozambique and Zimbabwe, and now in more than two dozen countries in almost every part of the world.

Richard Lessells, an infectiologist at Durban's KwaZulu-Natal University, said he expects the case numbers in South Africa to continue to rise.

"So that gives us again a bit more understanding that this variant is clearly highly transmissible, but looks like it also got that capacity to get round some of the immunity, either from the vaccines or from prior infection," he told DW.

Because of this immunity level, Lessells expects most cases to be on the milder end of the spectrum.

South Africa currently has its lowest lockdown level since October, which allows outdoor events with up to 2,000 participants. There's a four-hour curfew after midnight and a special set of rules for funerals, but apart from mask and social distancing obligations, most public life has returned to its pre-pandemic normality.

South Africa's health minister, Joe Phaahla, doesn't want to impose stricter measures for now. But for some businesses, the risks are growing.

The Ballito Rage music festival on the outskirts of Durban was canceled after just one day, once 36 visitors tested positive.

For many people working in tourism, omicron has evoked similar feelings. So far, they have not been suffering from the new variant itself, but rather from travel bans and restrictions imposed by many governments to stop travel from South Africa and its neighbors.

Tour guide Zola Ngciwe was alone in his jeep watching the giraffes at Mziki Safari Lodge, northwest of Johannesburg.

"Generally my vehicle will be filled with tourists from all over the world. But the latest Covid-19 travel ban has resulted in cancellation after cancellation. And has left me in the glorious African bush all alone," he told DW.

After three Covid-19 waves, South Africa's tourism sector had just started to recover — and had expected to host many vaccinated travelers escaping the Northern Hemisphere winter.

"It costs us billions," said economist Alex van den Heever, an adjunct professor at University of the Witwatersrand in Johannesburg.

"It's incredibly unfortunate and is also going to have a chilling effect on whether or not South Africa is ever going to reveal information on a variant again," he told DW. "I can't speak for what government will do, what the people will do. But they will think twice."

President Cyril Ramaphosa has made the case for solidarity while traveling to western Africa, where omicron has been detected in Nigeria and Ghana.

In Ivory Coast, he used a metaphor which hardly any South African diplomat would use lightly: "As South Africa, we stand firmly against any form of health apartheid in the fight against this pandemic."

The South African health system itself has also suffered because of the latest restrictions.

"What upset us over and above the ban themselves and the restrictions was that there was no offer of support that was to be given to Africa in general or southern Africa to support us to deal with this continued pandemic," said Durban-based infectiologist Lessells.

"What's going to be done to address the vaccine inequality issue, what is going to be done to make sure that we still have supplies that we need, reagents for our lab to do the sequencing ... All these things that don't immediately get recognized with these travel restrictions but have a huge impact on the direct effect of controlling this virus," he said.

The ratio of positive tests among all tests conducted is also rising, which points to a growing number of undetected infections. "The key thing is really what we see with hospitalizations and how much strain does the health system come under," said Lessells.

Another factor adding to this wave's curve is the vaccination campaign. At least in South Africa, the vaccine itself is not as scarce as it once was — it's the people willing to get vaccinated who are often missing these days.

The government is now looking into the option of mandatory vaccinations, along with a lottery meant to attract people to get their shot. All citizens who get immunized before New Years Eve have the chance to win up to 2 million rand (€110,000/$124,000).

The lottery, or concerns over the new variant, may have had an effect: this week, the number of inoculations administered per day has increased sharply.