Owner Spends £300 To Treat His Dog's Limping; Finds Out He Was Copying Him Out Of Sympathy

Being worried about his dog for obvious reasons, Jones rushed to the hospital to get his furry friend checked. 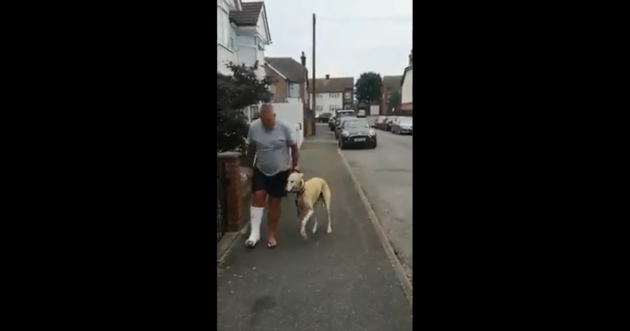 Dogs have the ability to sense if their owner is feeling low or is unwell. It is said that dogs are in fact the best form of therapy for humans. It's true that dogs are humans' best friend and this has been proved in the case of Russell Jones.

After he found his dog limping, Jones spent over £300 on his treatment, only to find out that at the dog was limping to show sympathy for his injured owner. Jones had a fractured leg which caused him limping, seeing that the dog also started doing the same to show sympathy to his owner. You read that right!

In a video doing rounds on social media, Jones can be seen walking with a plastered cast on account of which he walks with a limp. Walking right beside him is his dog, who too can be seen struggling to walk with a clearly evident limp. Being worried about his dog for obvious reasons, Jones rushed to the hospital to get his furry friend checked. "Cost me £300 in vet fees and X-rays, nothing wrong just sympathy. Love him," said Russell according to a SkyNews Australia.

After rounds of X-rays and examinations by doctors, it was concluded that the dog had no real injury but was limping to show sympathy towards his beloved owner. The medical examination cost Jones a huge financial hiccup of £300, only to get to know that nothing was actually wrong.  "Cost me £300 in vet fees and X-rays, nothing wrong just sympathy. Love him," said Russell according to a SkyNews Australia.