Imran Khan received by President Ghani on his arrival at ARG Presidential Palace, situated in the heart of Kabul city. 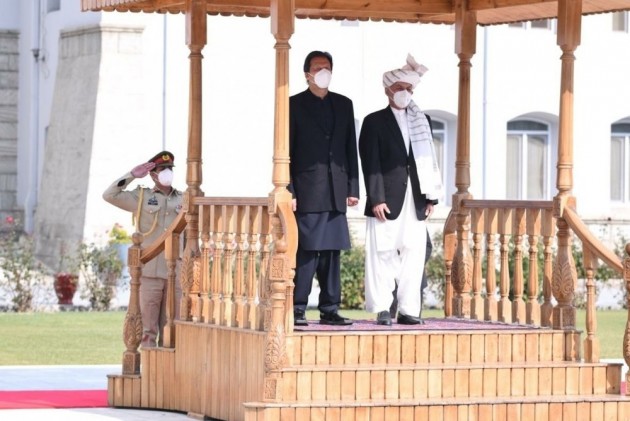 Pakistan Prime Minister Imran Khan on Thursday met with President of Afghanistan Ashraf Ghani in Kabul and the two leaders explored ways to deepen the bilateral ties and discussed the Afghan reconciliation process, amidst an uptick in violence that has strained the peace push in the war-torn country.

He was received by President Ghani on his arrival at ARG Presidential Palace, situated in the heart of Kabul city.

According to officials, the two leaders discussed ways to further strengthen the bilateral relations, the peace process and regional economic development and connectivity.

They agreed to strengthen the bilateral relations as the people of Pakistan and Afghanistan are linked through bonds of history, faith, culture, values and traditions.

Khan expressed confidence that his visit would help foster a stronger and multi-faceted relationship between the two countries.

The visit will help foster a stronger and multi-faceted relationship between the two countries, according to the Pakistan Foreign Office.

This is Khan's first visit to Afghanistan since assuming office in 2018. It is the highest-profile visit by a Pakistani official to Kabul since peace talks began between the Taliban and the Afghan government in Doha in September.

It comes days after the Pentagon announced it would reduce the number of US military personnel in Afghanistan from 4,500 to 2,500 by mid-January.

The announcement came as there has been an uptick in violence, with the Taliban continuing to carry out attacks targeting government leaders, security forces, and civilians.

The Pakistan prime minister's visit is being billed as a symbol of increasing confidence between the two countries, triggered by Pakistan's role in bringing the Taliban to the negotiation table, after years of acrimony between Islamabad and Kabul.

Earlier, the two leaders had a bilateral meeting on the sidelines of the 14th OIC Summit in Makkah in May 2019. Khan also had a telephonic conversation with President Ghani in September 2020.