Bibi, a 47-year-old mother of four, who is now in protective custody, was convicted in 2010 after being accused of insulting Islam in a row with her neighbours. She always maintained her innocence, but spent most of the past eight years in solitary confinement. 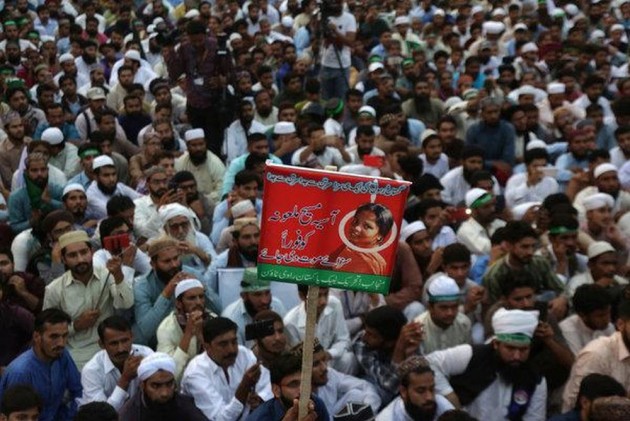 Pakistan's Supreme Court on Tuesday rejected a review petition against its decision to acquit Christian woman Aasia Bibi who was on death row for eight years on charges of blasphemy, in a major setback to hardline Islamists who had demanded her execution.

Bibi, a 47-year-old mother of four, who is now in protective custody, was convicted in 2010 after being accused of insulting Islam in a row with her neighbours. She always maintained her innocence, but spent most of the past eight years in solitary confinement.

The apex court's decision in October last to overturn her conviction sparked nationwide violent protests and death threats from hardline Islamist groups. The protests subsided when the government allowed the protesters to file a review petition against Bibi's acquittal.

A three-member bench, headed by Chief Justice Asif Saeed Khosa, on Tuesday dismissed the review petition filed by local prayer leader Qari Muhammad Salaam as the plea failed to point out any flaw in the verdict of the court that acquitted Bibi.

During the hearing, Salaam's lawyer said that the matter of Bibi’s acquittal is a matter concerning the Muslim clergy and religious scholars should also be called to present their point of view.

"How is this a matter of religion?" the chief justice asked. "Has the verdict not been given on merit?"

"The verdict was given on the basis of testimonies; does Islam say that one should be punished even if they are found not guilty?" he asked.

"Tell us where we failed to take into account testimony or where we misread the testimonies," Justice Khosa asked.

Justice Khosa, who was part of the five-member larger bench which acquitted Bibi on Ocotber 31, further said that if testimonies of those involved in the case were not judged correctly, the court will review them and if the matter needs to be referred to a larger bench, the decision will be taken.

"An FIR lodged five days after an incident is suspect," said Justice Khosa while referring to report lodged in the case and which formed the basis for Bibi's prosecution.

He said that testimonies also differed in their account regarding the size and the place of the crowd which had gathered following the blasphemy accusation, the Express Tribune reported.

The lawyer countered that late registration of an FIR does not necessarily mean ill intention.

"Should we then hand an accused on the basis of such testimonies," questioned the chief justice.

He dismissed the review petition, saying the petitioner was not able to point out any mistake in the apex court verdict acquitting Bibi.

Security was tightened in Islamabad where the court is located. Paramilitary Rangers were deployed in addition to the regular police to deal with any unsavoury situation.

Bibi was arrested in 2009 for allegedly using derogatory words during a quarrel with Muslim women while working on a farm in Nankana Sahib area of Punjab province. The case was filed by Salaam on the complaint of the Muslim women.

She was convicted in 2010 by the trial court and her death sentence was maintained by the Lahore High Court in 2014.

Salmaan filed the review petition in the case on November 1, 2018 at the Lahore registry of the apex court, urging the Supreme Court to reconsider its decision.

In the petition, it was argued that the apex court's acquittal of Bibi did not meet the standards of jurisprudence as well as Islamic provisions and the "normal principle of justice with reference to application in blasphemy laws".

It also challenged the top court's dismissal of the alleged "confession" that Bibi was forced to make by the people of her village and argued that the Supreme Court should have applied the Law of Evidence differently in this case.

Bibi's lawyer, who fled to the Netherlands after receiving death threats for defending her, returned home Sunday to represent her in the case.

Her case has been deeply divisive in Pakistan where there is strong support for the controversial blasphemy laws.

Bibi's case gained prominence when former governor of Pakistan's Punjab province Salman Taseer was killed in 2011 for supporting her and criticising the blasphemy laws.

A month after Taseer was killed, Pakistan's religious minorities minister Shahbaz Bhatti, a Christian who spoke out against the blasphemy law, was shot dead in Islamabad.

The blasphemy laws were promulgated by former military dictator Ziaul Haq in 1980s. A person convicted under these laws is given death sentence.