Just ahead of the World Cup match between India and Pakistan, an advertisement on a Pakistan channel featured a spoof on Abhinandan. 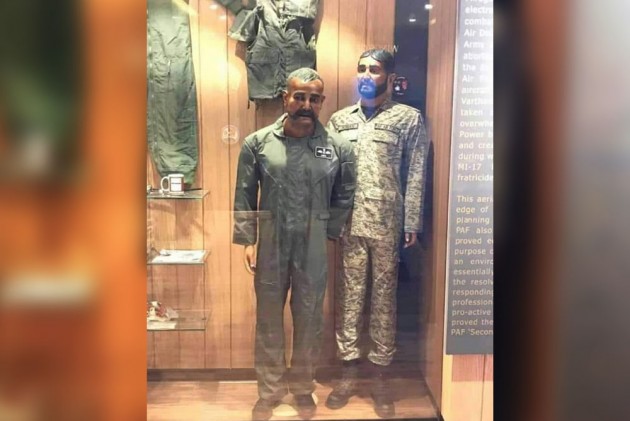 In a bizarre promotion, Pakistan has displayed a mannequin of Indian Air Force pilot Wing Commander Abhinandan Varthaman inside a war museum of Pakistan Air Force in Karachi.

A Twitter posting by Pakistan journalist and political commentator Anwar Lodhi shows a photo of the mannequin of the IAF pilot captured on February 27 by Pakistan following a dogfight between the two air forces in which his MIG-21 was shot down in Pakistan-occupied-Kashmir. Abhinandan was later released on March 1 at the Attari-Wagah border.

Lodhi shared the picture and wrote: "PAF has put mannequin of Abhi Nandhan on display in the museum. This would be a more interesting display if they can arrange a Cup of FANTASTIC tea in his hand."

PAF has put mannequin of Abhi Nandhan on display in the museum. This would be a more interesting display, if it they can arrange a Cup of FANTASTIC tea in his hand. pic.twitter.com/ZKu9JKcrSQ

In a video that was released by Pakistan military of Abhinandan when he was in their custody in February this year, the Air Force pilot is seen sipping tea and at one point he is heard replying to question by his captors: "The tea is fantastic, thank you."

The photograph shared by Lodhi on the microblogging site also captures a mug placed behind on the left-hand side of the Abhinandan's mannequin which is flanked by a Pakistani soldier. The entire display is encased in a glass showcase.

Just ahead of the World Cup match between India and Pakistan, an advertisement on a Pakistan channel featured a spoof on Abhinandan, which came under heavy backlash on social media. This ad was also based on the video of the IAF pilot taken during his captivity.

During a counter-attack in response to the Balakot airstrike in February, Abhinandan, while flying the MiG 21 Bison, was chasing Pakistani F-16 fighters, which had transgressed into the Indian airspace, and in the process, his plane crossed over to Pakistani side and was shot down.

He ejected safely but was taken into custody by the Pakistan Army upon landing. Before his plane was shot, he had hit a Pakistani F-16.