Pakistan Did Not Give Unhindered Consular Access To Kulbhushan Jadhav: India

The External Affairs Ministry said the consular officers could not engage Kulbhushan Jadhav on his legal rights and were prevented from obtaining his written consent for arranging his legal representation. 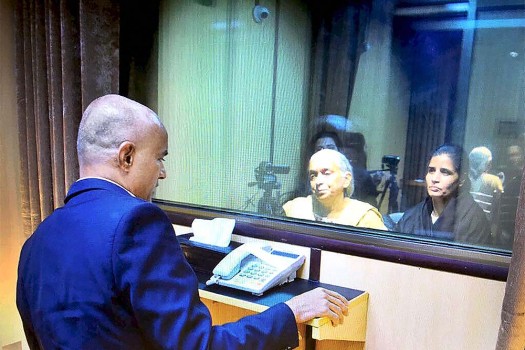 India on Thursday said Pakistan did not give "unimpeded, unhindered and unconditional" consular access to Indian death row convict Kulbhushan Jadhav in violation of an order by an international tribunal and its officials left the meeting venue after lodging a protest.

External Affairs Ministry Spokesperson Anurag Srivastava said Jadhav was "visibly under stress" and indicated that clearly to the Indian consular officers, adding the arrangements did not permit a free conversation between them.

He said the consular officers could not engage Jadhav on his legal rights and were prevented from obtaining his written consent for arranging his legal representation.

Earlier, Pakistan announced that it provided consular access to Jadhav ahead of a deadline to file a review petition in a Pakistani court against his conviction by a military court on charges of espionage and terrorism.

"The consular officers were not given unimpeded, unhindered and unconditional access to Jadhav. On the contrary, Pakistani officials with an intimidating demeanour were present in close proximity of Jadhav and consular officers despite the protests of the Indian side," Srivastava said.

He said it was also evident from a camera that was visible that the conversation with Jadhav was being recorded.

"In the light of these circumstances, the Indian consular officers came to the conclusion that the consular access being offered by Pakistan was neither meaningful nor credible. After lodging a protest, they left the venue," he said.

Jadhav, a 50-year-old retired Indian Navy officer, was sentenced to death by a Pakistani military court on charges of "espionage and terrorism" in April 2017. Weeks later, India approached the International Court of Justice (ICJ) against Pakistan for denial of consular access to Jadhav and challenging the death sentence.

The Hague-based ICJ ruled in July last year that Pakistan must undertake an "effective review and reconsideration" of the conviction and sentence of Jadhav and also to grant consular access to India without further delay.

"It is clear that Pakistan's approach to this matter continues to be obstructive and insincere. It has not only violated its assurance to the ICJ to fully implement the 2019 judgement, but also failed to act in accordance with its own ordinance," Srivastava said.

He said External Affairs Minister S Jaishankar has apprised the family of Jadhav about Thursday's developments.

"We reiterate our commitment to ensure the safe return of Jadhav to India and will decide on a future course of action in the light of the events today," the MEA spokesperson said.