The temple was vandalized by hooligans, who were infuriated over the release of a minor boy, arrested allegedly for urinating in a local seminary. 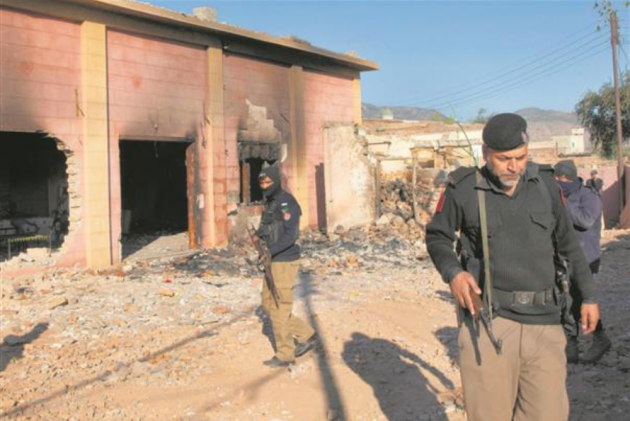 Following Supreme Court’s reprimand to authorities in Pakistan over temple vandalism, the provincial assembly of the country’s Khyber Pakhtunkhwa has unanimously passed a resolution condemning the attack in the country’s Punjab province.

The temple was vandalized by hooligans at Bhong city of Rahim Yar Khan district, some 590 kms from Lahore; who were infuriated over the release of an eight-year-old Hindu boy by a court—who was arrested for allegedly urinating in a local seminary.
An FIR has also been registered under terrorism and other sections of the Pakistan Penal Code against over 150 people for their involvement in attacking the temple.

The resolution at the provincial assembly of Khyber Pakhtunkhwa condemning the attack on the Hindu temple was moved by minority Member of the Provincial Assembly (MPA) Ravi Kumar to which the house gave a unanimous approval on Friday.

The house also passed a resolution for the establishment of the Commission for Minority Affaires in Khyber Pakhtunkhwa. The resolution was presented by Minister for Human Rights and Parliamentary Affairs Shaukat Yusafzai.

Pakistan's law enforcement agencies on Saturday arrested over 50 people, including the main suspects, allegedly involved in the attack, a day after the Supreme Court admonished the authorities for their failure to protect the shrine.

They also booked 150 people in connection with the attack.

Pakistan’s Supreme Court on Friday pulled up authorities for failing to stop the attack and ordered the arrest of the culprits, observing that the incident has tarnished the image of the country abroad.

Chief Justice of Pakistan Gulzar Ahmed said that vandalism at the temple had brought shame to the country as police acted like silent spectators.

The Chief Justice wondered at the arrest of the eight-year-old boy and asked whether police were incapable of understanding the mental capacity of the minors.

Pakistan's parliament on Friday condemned the temple attack by adopting a resolution.

The hearing in the case has been adjourned till August 13.

India on Thursday summoned the Pakistani charge d'affaires in New Delhi and lodged a firm protest, expressing grave concerns at this reprehensible incident and the continued attacks on the freedom of religion of the minority communities and their places of religious worship in Pakistan.

The majority of Pakistan's Hindu population is settled in Sindh province where they share culture, traditions and language with Muslim residents. They often complain of harassment by extremists. (With PTI inputs)