Baghdadi died on Sunday after he blew up his suicide vest following the US raid on his compound in Syria's Idlib province. 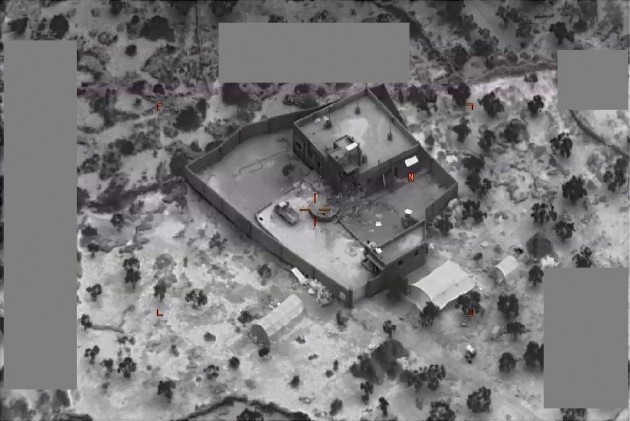 The Pentagon on Wednesday released short videos of the US forces' raid in northwestern Syria that resulted in the death of ISIS leader Abu Bakr al-Baghdadi.

Baghdadi, 48, died on Sunday after he blew up his suicide vest following the US raid on his compound in Syria's Idlib province, some four miles from Turkish border.

Releasing a few short videos of the strike, US Central Command Commander Gen. Kenneth Mckenzie told reporters at a Pentagon news conference that after the raid, Baghdadi's compound looks "pretty much like a parking lot with large potholes."

"...at the compound, fighters from two locations in the vicinity of the compound began firing on U.S. aircraft participating in the assault."
- Gen Frank McKenzie CDR USCENTCOM pic.twitter.com/SkrtHNDs7w

The compound was destroyed in a way to ensure that it would not be a shrine or otherwise memorable in any way. “It's just another piece of ground now,” he said.

Before Baghdadi was found by the US forces running for life in a tunnel, American troops killed five ISIS members, including four women who engaged with them in fire, Mckenzie said.

He said two children, appeared to be under 12 years old, were killed in the raid, not three as believed earlier.

"About Baghdadi's last moments. I can tell you this, he crawled into a hole with two small children, blew himself up while his people stayed on the ground. So, you can deduce what kind of person it is based on that activity,” he said but refused to confirm or deny anything else about his last seconds.

McKenzie said in all six ISIS members were killed including four women and two men.

"This is in addition to the two children killed by Baghdadi as he blew himself up,” he said adding that 11 children were protected by the assault force and two men were detained.

"We believe Baghdadi actually may have fired from his hole in his last moments. The other people that were engaged on the objective were behaving in a threatening manner with suicide vests approaching the raid force and that causes you to make some decisions, particularly when they don't respond to Arabic language commands to stop, warning shots, and the progression of escalation that that our special operators are so very good at,” McKenzie said.

Giving details of the operation, the American general said the US forces cleared significant debris from the tunnel and secured Baghdadi's remains for DNA identity confirmation.

"Following collection of samples for formal DNA analysis, Baghdadi's remains were buried at sea in accordance with the law of armed conflict within 24 hours of his death,” he said.

They also secured whatever documentation and electronics could be found, which was substantial. The assault force then left the compound and returned to their helicopters with the two detainees.

After US forces were safely off the objective, they employed precision standoff munitions to destroy the compound and its contents, McKenzie said.

"The operation was exquisitely planned and executed. It demonstrates the United States' global reach and our unwavering commitment to destroy ISIS, bring its leaders to justice, and to protect America and others from people like Baghdadi. The mission was a difficult, complex, and precise rate that was executed with the highest level of professionalism and in the finest tradition of the US military,” McKenzie said.

According to the CENTCOM Commander, Defence Intelligence Agency conducted the analysis and compared DNA from the remains taken from the compound with an on-file sample taken when Baghdadi was at Camp Bucca Prison in Iraq in 2004.

"The analysis showed a direct match between the samples and produce a level of certainty that the remains belonged to Baghdadi of one in 104 septillion, which is certainly beyond a shadow of a doubt,” he said.

Despite the death of Baghdadi, McKenzie said the US Central command remains focused on the enduring defeat of ISIS and will remain vigilant against all terrorist organisations in the region who threaten the United States, its partners, and allies.