Immediately after the review meeting, Prime Minister Narendra Modi left for an aerial survey to the worst cyclone-affected areas of Balasore and Bdahrak in Odisha, on his way to West Bengal. 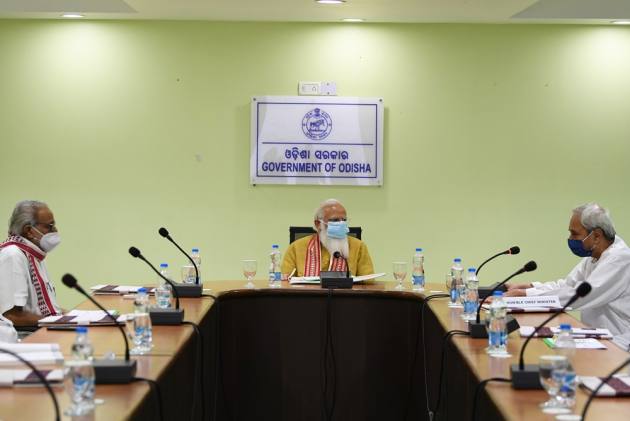 In a meeting held in Odisha, where the state government demanded long-term solutions to mitigate problems of repeated cyclones and provision of disaster-resilient power system, Prime Minister Narendra Modi Friday reviewed the post-cyclone situation and damages caused by Cyclone Yaas.

The Odisha government sought no immediate funds to manage the expenditure incurred in disaster management, but stressed long-term solutions to the problem as Odisha is frequently hit by major calamities like cyclones, Odisha’s Special Relief Commissioner (SRC) P K Jena told reporters after the meeting.

Immediately after the review meeting which continued for about an hour, attended by Odisha Governor Ganeshi Lal, Chief Minister Naveen Patnaik, two Union Ministers- Dharmendra Pradhan and Pratap Sarangi and senior officials, the Prime Minister left for an aerial survey to the worst cyclone-affected areas of Balasore and Bdahrak in Odisha, on his way to West Bengal.

The Chief Minister sought both a disaster resilient power infrastructure and a permanent solution to protect the coastal region from storm surges that accompany cyclones, the SRC said adding that Odisha has a long coastline of about 480 kilometers of which above 200 km is vulnerable to tidal surge.

The state has sought no immediate funds or assistance from the Government of India today. The state will manage the situation from its resources. We will assess the damage in seven days and later seek central assistance, Jena said.

Union Minister Pratap Sarangi, who was present in the PMs review meeting said: The Centre is all along with Odisha. The state has not made immediate demanded, but sought permanent solutions by the setting of disaster-resilient infrastructure in the power sector and measures against the storm surge.

Since Prime Minister is now going on an aerial survey to see the damages done by Yaas, he will announce relief package by this evening, Sarangi said.

The Chief Minister categorically said that both the centre and the state should join hands to work for the protection from the danger of storm surge, which this time saw ingresses of saline water to over 120 villages in the coast districts, the SRC said.

Patnaik also wanted long term solution to the problem of coastal erosion which adds to the danger from storms in the coastal belt. The Chief Minister also drew the attention of the Prime Minister to the disaster-resilient power system, the demand for which is being made for last two years. This apart, the CM also empathetically demanded a coastal storm surge protection mechanism, Jena said.

Jena said there is every possibility that the height of the storm surge on the Odisha coast may go up to 8 meters along the state coast. Therefore, robust planning is required. The state government's demand was to ensure a disaster-resilient coastal infrastructure, he said.

Cyclone Yaas, packing winds gusting to 145 kmph whiplashed parts of India's eastern coast on Wednesday, killing at least three people in Odisha and one in West Bengal and leaving behind a trail of damaged homes and flooded farmland, forcing more than 21 lakh people to be evacuated to safe shelters in the states of West Bengal, Odisha and Jharkhand.

After the havoc caused by the cyclone, heavy post-cyclone rains on Thursday has seen river water levels rising above the danger mark, placing four districts of Odisha-Bhadrak, Jajpur, Kendrapara and Keonjhar - on high alert.