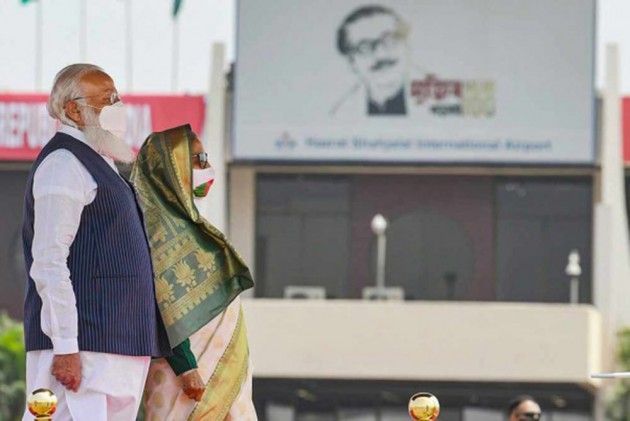 Prime Minister Narendra Modi, who is on a two-day visit to Bangladesh, visited the mausoleum of 'Bangabandhu' Sheikh Mujibur Rahman at Tungipara in Bangladesh's southwestern Gopalganj district on Saturday.

Modi’s visit comes in the backdrop of India awarding the Gandhi Peace Prize to Sheikh Mujibur Rahman, former President of Bangladesh and the “father of the nation”. It was for the first time that the award was given away posthumously.

Modi, during his visit paid floral tributes to the late leader. The prime minister, was received at the mausoleum by his Bangladesh counterpart Sheikh Hasina, who is the daughter of Rahman. Sheikh Rehana, the youngest daughter of Rahman was also present.

On Saturday, Modi, who was covering his face with a mask, paid floral tributes to 'Bangabandhu' and stood in silence for a few minutes while Hasina and her Cabinet colleagues offered 'Fatiha'. He is the first Indian dignitary to ever visit Bangabandhu's grave.

He also signed the visitors' book at the mausoleum complex and planted a sapling at its premises.

Modi earlier said Bangabandhu was a champion of human rights and freedom, and a hero to Indians as well.

Rahman was imprisoned in Pakistan, which was forced to set him free on January 8, 1972.

He returned to Dhaka on January 10, 1972. He later took over as Prime Minister of Bangladesh but was assassinated by some military officers during a coup d'etat on August 15, 1975. His wife, brother, sons and daughters-in-law were also assassinated along with him. Hasina and her sister Sheikh Rehana survived as they were in Europe.

Modi, on Saturday also visited the centuries-old Jeshoreshwari Kali temple in Ishwaripur village in southwestern Bangladesh to offer prayers and announced that India will build a multipurpose community hall for the worshippers.

The prime minister was given a traditional welcome upon his arrival at the temple.

Inside the temple, Modi offered prayers and sat on the floor while the priest was reciting the religious texts.

"Feeling blessed after praying at the Jeshoreshwari Kali Temple,” Modi tweeted after offering prayers at the temple in southwestern Shatkhira district, bordering India.

Feeling blessed after praying at the Jeshoreshwari Kali Temple. pic.twitter.com/8CzSSXt9PS

"PM @narendramodi places hand made Mukut on Ma Kali. Mukut made of silver with gold plating. Hand made over three weeks by a traditional artisan," Ministry of External Affairs Spokesperson Arindam Bagchi tweeted.

Mukut made of silver with gold plating. Hand made over three weeks by a traditional artisan. pic.twitter.com/xNg0pjrmkZ

Speaking outside the temple, Modi said that he prayed to Goddess Kali to free the human race from Covid-19.

Noting that a large number of devotees from across the border and Bangladesh visit during ‘Maa Kali mela’ at the temple, Modi said a community hall is needed which should be multi-purpose so that when people come here during Kali puja, it is useful to them too.

Modi said India will build a multipurpose community hall at the temple.

"It should be useful for social, religious and educational events for local people. Most importantly, it should act as a shelter for all at the time of disasters like cyclones. India will do construction work. I express my gratitude to the Bangladesh government that they have wished us well for this,” Modi said.

According to Hindu mythology, the Jeshoreshwari Kali temple is one of the 51 Shakti Peeths, scattered across India and neighbouring countries. Records suggest a Hindu king set up the temple in the 16th century.

Ahead of his visit to Bangladesh, Modi said on Thursday that he looks forward to offering prayers to Goddess Kali at the Jashoreshwari Kali temple located in Ishwaripur village in Shyamnagar upazila of Satkhira, which borders West Bengal.

The Hindu community and temple authorities with the government support redecorated the temple ahead of Modi’s visit.

Last time when Prime Minister Modi visited Bangladesh in 2015, he offered puja at Dhakeshwari temple in the national capital.

Bangladesh has taken extra security measures for the Indian premier's visit in the wake of protests by few leftist and Islamist groups.