With the Taliban firmly in control of Afghanistan, there is little to celebrate for most people opposed to the new dispensation. Instead in a few pockets across the country, citizens are showing extraordinary courage by defying the Taliban and embracing the national flag. 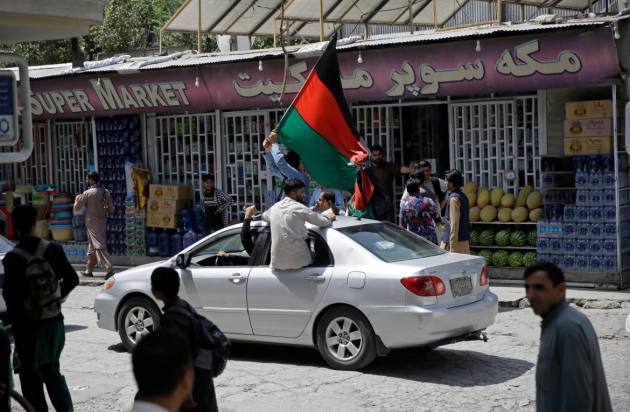 With the Taliban firmly in control of the country, there is little to celebrate for most people opposed to the new dispensation. Instead in a few pockets across the country, citizens are showing extraordinary courage by defying the Taliban and embracing the national flag. Groups of people are out with the Afghan flag in Asadabad, capital of Kunar province, according to reports from Kabul.  Some in Asadabad have gone on to bring down and tear the Taliban flag. There are reports of deaths, though exact number of deaths are not confirmed and whether this was due to firing or a general stampede is not known.  "Our flag, our identity," a crowd in Kabul shouted, a video clip posted on social media today showed.

Similarly, there were reports from Jalalabad yesterday of people carrying the national flag to send a message to the Taliban. Three people were killed as the Taliban fired on the crowd. Similar reports have come about protests from a district in Paktai province.  Protests also reported from Khost. The defiance by ordinary citizens, even as President Ashraf Ghani has fled the country, and the much- vaunted war lords as well as the army tamely switched sides and declared loyalty to the advancing Taliban warriors. Whether these early show of resistance builds up to something more is not clear.

Afghanistan’s former first vice president Amrullah Saleh, who did not flee with Ashraf Ghani has welcomed this show of defiance. He is said to be in the Panjshir valley, the home of Afghanistan’s hero Ahmad Shah Massoud, who resisted both the Soviet army as well as the Taliban. Called the lion of Panjshir, he is revered by Afghans for his valour. He was assassinated by the Taliban in 2001.  His son Ahmad Massoud has now said he will follow in his father’s footsteps and challenge the Taliban. He and Saleh are joining hands to build up another anti-Taliban movement in the valley, surrounded by high mountains, which the Russians could never penetrate. Ahmad Massoud has appealed to the US to supply his people with ammunition. Considering the current mood in the White House, with President Biden ready to turn his back on Afghanistan, chances of help from Washington are dim. Some units of the Afghan Special Forces are also said to have retreated to Panjshir valley and vowed to regroup and fight the Taliban. This is the area from where the Taliban will face the maximum opposition.  Much will depend on how the next few months pan out and how the Taliban plays its cards.

The situation around the airport in Kabul remains tense as the Taliban had to resort to firing outside the perimeters of the airport. Large desperate crowds are milling around in an attempt to get inside the airport. While eyes of the foreign media are on the evacuation, people in many areas of Kabul say that the Taliban are entering homes to find out those they believe collaborated with the Afghan government. Arrests are on- going, and in cases the officials are not found, family members are being held. Despite pronouncements to the media that a general amnesty will be given to all those serving the former regime, in actual fact things are very different. Two persons Outlook contacted said this. Neither wanted their identities to be disclosed for fear of reprisal.

Shrayana Bhattacharya / Shah Rukh Khan is the soothing balm for millions of Indian women living an oppressive life in an insensitive, patriarchal society.