Post Office In USA To Be Named After Sikh Police Officer

Deputy Sandeep Singh Dhaliwal was gunned down at a traffic stop last month. He was the first Texas deputy to wear turban and beard while performing his duty. 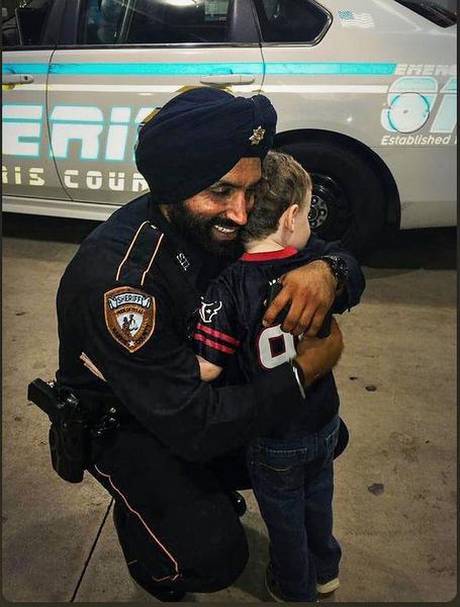 A post office in west Houston has been renamed in the honour of its trailblazing Indian-American Sikh police officer, Sandeep Singh Dhaliwal, who was shot dead in an ambush-style attack back in 2019.

A father of three, the 42-year-old Deputy Sandeep Dhaliwal was gunned down during a traffic stop on September 27. He made national headlines in 2015 when he became the first Texas deputy approved to wear his turban and beard while performing his duty.

A dedication ceremony was held on Tuesday where Congresswoman Lizzie Fletcher, who brought the renaming legislation to the US House of Representatives, said it was fitting to rename the post office at 315 Addicks Howell Road after someone who committed his life to serving the community.

“I am honoured to play a role in commemorating Deputy Dhaliwal’s remarkable life of selfless service,” she said.

“He represented the very best of our community: he worked for equality, connection, and community through his life of service to others. I was glad to work with a bipartisan delegation, our community partners, and those in the Sikh community, to pass legislation to rename this building the Deputy Sandeep Singh Dhaliwal Post Office,” Fletcher added.

“We are thankful to Congresswoman Fletcher and the entire Texas delegation for honouring a committed public servant who touched countless lives and served as a trailblazer. He was a true hero who inspired everyone to love their neighbours,” Gonzalez said.

According to the sheriff, Dhaliwal joined the agency as a detention officer in 2009 after feeling compelled to bridge the gap between law enforcement and the Sikh community. He later became a patrol deputy leading the way for other Sikhs to serve with the Harris County Sheriff's Office.

“I’m thankful that visitors to the newly renamed post office will see his name and be encouraged to learn how special he was,” said Commissioner Adrian Garcia, who originally hired Dhaliwal in his capacity as previous sheriff of Harris County.

“Deputy Dhaliwal made the ultimate sacrifice to protect us, and he will never be forgotten. I am thankful to Representative Fletcher and the United States Postal Service for this important recognition. Sandeep lived his life with the purpose to spread dignity and respect to all he came in contact with, and I am hopeful that the Deputy Sandeep Singh Dhaliwal Post Office will inspire all who visit to follow in Sandeep’s example," Garcia said.

Father of the slain police officer, Pyara Singh Dhaliwal, expressed gratitude towards the people of Houston for their support.

“Since my son was taken from our family in a senseless act of violence, we have received an outpouring of support and love from the greater Houston community. We are so grateful and so honoured that Sandeep is being memorialised in this way—forever becoming a part of the city that he served faithfully both in and out of uniform,” he said.

Meanwhile, US Postal Service District Director Julie Wilbert said getting a post office renamed is not a common occasion and is reserved for a select group of individuals.

"To put it in its proper perspective, the postal service has over 31,000 retail and post offices. There are less than 900 that have been dedicated in honor of an individual," Wilbert said.

Sikh American Legal Defense and Education Fund (SALDEF) Southwest Regional Director Bobby Singh said: “Sandeep Singh Dhaliwal did not set out to be a trailblazer, he simply approached life with a caring heart, a generous spirit, and a warmth that brought people together.”

“Along with the many friends here today, our community has been forever changed by his death but this building will forever serve as a recognition of his life. He lived the true American—and Houstonian—life,” he added.

In the wake of Dhaliwal’s death, Fletcher led the entire Houston delegation in introducing H. Res. 616, a resolution dedicated to honour the life and mourn the loss of the police officer and spoke on the House floor about his remarkable life and tragic death.

In 2020, the Congresswoman’s bill, H.R. 5317, the Deputy Sandeep Singh Dhaliwal Post Office Act, was passed and signed into law by then President Donald Trump.

However, this isn't the first dedication for Deputy Dhaliwal. A year after his death, a portion of Beltway 8 near Highway 249 was renamed in his honour.