Both the leaders, Biden and Modi committed that the US and India will work closely together to win the fight against the Covid-19 pandemic. 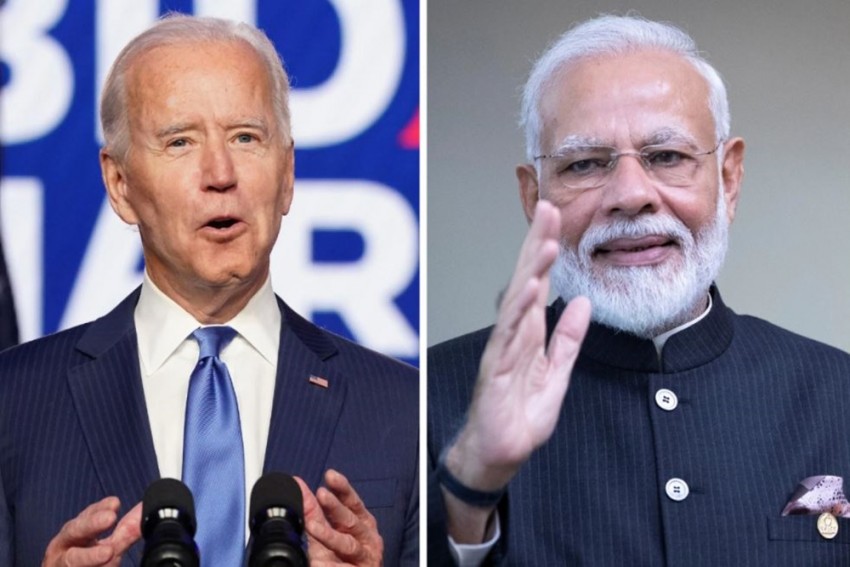 US President Joe Biden and Indian Prime Minister Narendra Modi set up an ambitious agenda to take the bilateral relationship to the next level during a phone call on Monday.

Both the leaders, Biden and Modi committed that the US and India will work closely together to win the fight against the Covid-19 pandemic. They also said to renew their partnership on climate change, rebuild the global economy in a way that benefits the people of both countries, and stand together against the scourge of global terrorism, the White House said in a readout of the call.

Modi is the first foreign leader, whom Biden has spoken with beyond neighbours and key NATO allies, reflecting on the significance his administration attaches to ties with India.

They agreed to continue close cooperation to promote a free and open Indo-Pacific, including support for freedom of navigation, territorial integrity and a stronger regional architecture through the Quad, the White House said after the first phone call that Biden had with Modi as the president of the United States.

After being sworn in as the 46th President of the United States, Biden so far had phone call with nine foreign leaders. Traditionally the new American president makes first phone calls to the leaders of two neighbouring countries Canada and Mexico.

Thereafter, Biden called leaders of close American allies, including Britain, France, Germany, South Korea and Australia. In between, he called Russian President Vladimir Putin, which was necessitated due to the extension of the New Start Treaty for another five years.

"The President underscored his desire to defend democratic institutions and norms around the world and noted that a shared commitment to democratic values is the bedrock for the US-India relationship," the White House said, adding that the two leaders resolved that the rule of law and the democratic process must be upheld in Burma (now Myanmar).

Biden and Modi agreed to stay in close touch on a range of global challenges and look forward to what the United States and India will achieve together for their people and for their nations, the White House said.

“We have an ambitious agenda for cooperation, and you will see active engagement in the days ahead," India’s Ambassador to the US, Taranjit Singh Sandhu, told PTI after the phone call between the two leaders.

The two leaders had a very warm and wide-ranging conversation on Monday.

"Based on our shared values and common strategic interests, we are committed to advancing India-US Strategic Partnership and closely working together with like-minded countries in meeting regional and global challenges – Covid-19 pandemic, economic recovery, clean energy and climate change, fight against terrorism, cooperation in the Indo-Pacific and beyond,” Sandhu said.

This was the second phone call between Biden and Modi after the November 3rd presidential elections.

The first one was on November 17. During their November 17 phone call, the two leaders reiterated their firm commitment to bilateral strategic partnership and discussed shared priorities such as Covid-19 pandemic, energy and climate change, and cooperation in the Indo-Pacific region, Sandhu said in an earlier interview last week.

These conversations have been very warm and forward looking, he said.

In his earlier interview, Sandhu said that India looks forward to working with the new Administration and other stakeholders around five baskets.

“First, given the pandemic, cooperation in healthcare and pharma and COVID-19 management, including affordable medicines and vaccines; second, the digital space, including information and communication technology, innovation and start-ups; third, the energy sector, including LNG, renewables, solar that will allow us to combat climate change; fourth, the education and knowledge partnership; and finally, our cooperation in strategic and defense areas, including in the Indo-Pacific,” he said.