At least 114 people were killed Saturday as security forces cracked down on protests against the February 1 coup that ousted Aung San Suu Kyi's elected government. 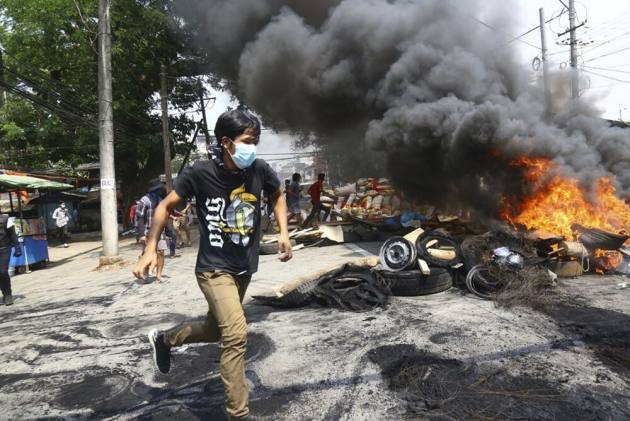 Protesters in Myanmar returned to the streets Sunday to press their demands for a return to democracy, just a day after security forces killed more than 100 people in the bloodiest day since last month's military coup.

Protests were held in Yangon and Mandalay, the country's two biggest cities, as well as elsewhere. Some of the demonstrations were again met with the police force.

At least 114 people were killed Saturday as security forces cracked down on protests against the February 1 coup that ousted Aung San Suu Kyi's elected government, according to the online news service Myanmar Now. The reported fatalities included several children under 16 years old.

Similar tallies of the death toll were issued by other Myanmar media and researchers, far exceeding the previous highest death toll on March 14. The number of killings since the coup is now more than 420, according to multiple counts.

The coup reversed years of progress toward democracy after five decades of military rule and has again made Myanmar the focus of international scrutiny.

The Saturday killings by police and soldiers took place throughout the country as Myanmar's military celebrated the annual Armed Forces Day holiday with a parade in the country's capital, Naypyitaw.

The bloodshed quickly drew international condemnation, both from diplomatic missions within Myanmar and from abroad.

UN Secretary-General Antonio Guterres said he was shocked by the killings of civilians, including children.

“The continuing military crackdown is unacceptable and demands a firm, unified & resolute international response,” he wrote on Twitter.

In the United States, Secretary of State Antony Blinken said in a tweet that his country was “horrified by the bloodshed perpetrated by Burmese security forces, showing that the junta will sacrifice the lives of the people to serve the few.”

The military chiefs of 12 nations issued a joint statement condemning the use of force against unarmed people.

“A professional military follows international standards for conduct and is responsible for protecting — not harming — the people it serves,” it said. “We urge the Myanmar Armed Forces to cease violence and work to restore respect and credibility with the people of Myanmar that it has lost through its actions."

The statement was issued by the defence chiefs of Australia, Canada, Germany, Greece, Italy, Japan, Denmark, the Netherlands, New Zealand, South Korea, the United Kingdom and the United States.

The human rights group Amnesty International revived criticism that the international community was not doing enough to end the state violence in Myanmar.

The Security Council has condemned the violence but not advocated concerted action against the junta, such as a ban on selling it arms. China and Russia are both major arms suppliers to Myanmar's military as well as politically sympathetic, and as members of the council would almost certainly veto any such move.

In recent days the junta has portrayed the demonstrators as the ones perpetrating violence for their sporadic use of Molotov cocktails. On Saturday, some protesters in Yangon were seen carrying bows and arrows. It has said its use of force has been justified to stop what it has called rioting.