A draft cybersecurity law due to be implemented in Myanmar has sparked protests in the country as people fear that it might be used to suppress dissent. 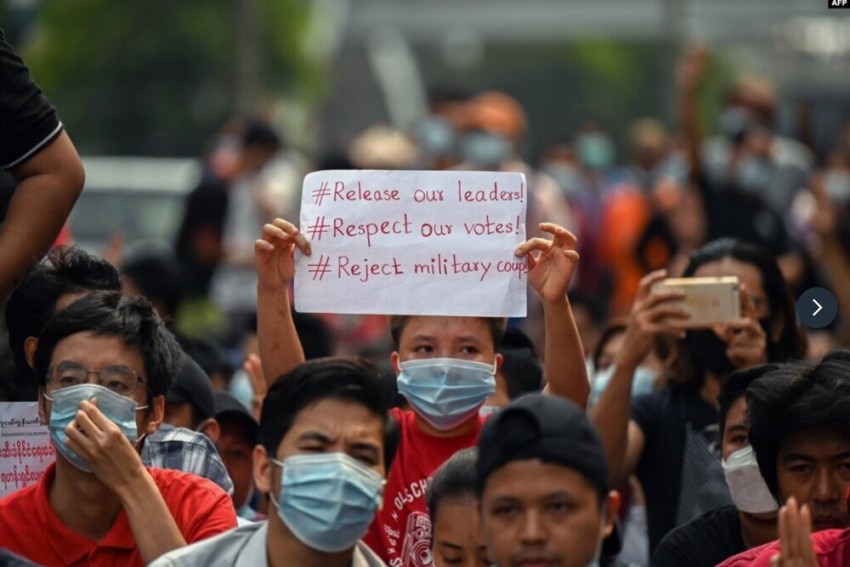 A draft cybersecurity law that shall be implemented in Myanmar has raised protests amidst concerns that it will be used to suppress dissent rather than protecting the privacy of the citizens.

Human rights activists have been urging the military authorities to drop the proposal and end the internet suspension which has been heightened following the military coup and overthrowing of the popularly elected Suu Kyi government.

The draft law shows the military's intent to “permanently undermine internet freedom in the country,” said Matthew Bugher, head of the Asia program for the group Article 19, which issued a statement condemning the plan along with the Open Net Association and the International Commission of Jurists.

Internet service providers and others were given until Monday, Feb. 15, to respond to the proposed law.

“It is telling that controlling cyberspace is one of the top priorities of the Myanmar military, which seized power through an illegitimate coup d'etat only last week,” said Sam Zarifi, the International Commission of Jurists' secretary-general.

“The military is used to having total power in Myanmar, but this time they have to face a population that has access to information and can communicate internally and externally,” he said.

The military's seizure of power and arrest of national leader Aung San Suu Kyi and other members of her National League for Democracy party has sparked massive peaceful protests across the country, despite efforts by authorities to enforce the order by disrupting internet services.

That has put internet service providers and other telecommunications companies in a bind.

Jeff Paine, managing director of the Asia Internet Coalition, a group of leading global internet companies including Facebook and Google, said the bill would give the military “unprecedented power to censor citizens and violate their privacy, contravening democratic norms and fundamental rights guaranteed under international law."

He urged coup leaders to consider “potentially devastating" impacts on the Myanmar economy and people.

“Access to telecom services is essential for people to exercise their basic right to freedom of opinion and expression, and to gain information. These services are also critical in the ongoing COVID-19 pandemic, and for economic opportunities," the company said in a statement posted on a section of its website devoted to the Myanmar crisis.

“When following authority orders in these irregular times, we know it has a negative impact on human rights in Myanmar. We are working to minimize this impact," it said.

The company said it was assessing each government order according to its legality, impact on human rights, necessity and transparency. It listed five active directives from the government since Feb. 1 to block IP addresses and said it was urging authorities to maintain an open internet.

But it also noted it needed to consider the safety of its own employees.

A group of 158 Myanmar nongovernmental organizations also has released a statement protesting the draft law.

Before the coup, the government had been working on a master plan for internet management and cybersecurity.

Among other requirements, opponents of the draft law said it calls for banning online anonymity, removing content the government deems unacceptable and punishing violations with criminal penalties.

The law demands the elimination of online comments considered to be misinformation or disinformation, that might cause “hate" or disrupt stability, and any comment that might violate any existing law.

Its provisions call for a sentence of up to three years and/or a fine for any person convicted of creating “misinformation” and “disinformation” with the intent of causing public panic, loss of trust or social division in cyberspace.

The law also would require internet service providers to keep usernames, IP addresses and other personal data for up to three years. The data has to be kept in a place designated by the government.

The internet service providers could face maximum prison sentences of three years and a fine for failing to comply with the law's broad and vague provisions.

“The proposal smacks of a legislative attempt to extend the powers the military had taken in an unlawful, anti-democratic coup,” said Kyung Sin Park, executive director of the Open Net Association, whose founders spearheaded a successful constitutional challenge against a similar law in South Korea in 2012.