President Putin’s telephone call to Prime Minister Modi has fuelled speculation of a Moscow initiative to broker peace between the two Asian giants. 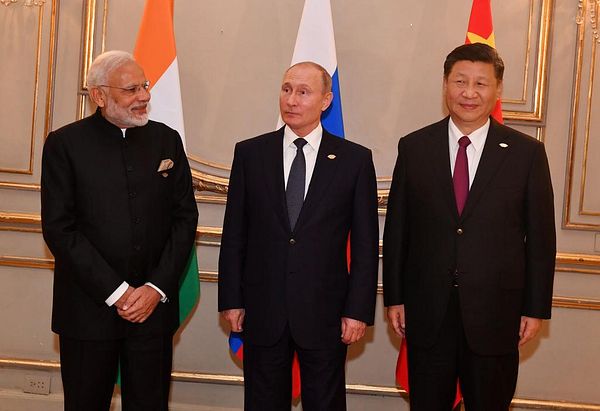 President Vladimir Putin’s telephone call to Narendra Modi yesterday has given rise to speculation about a possible Russian initiative to break the ice between India and China. It was triggered by a remark a week ago by a top aide of Putin that a summit between President Putin, Prime Minister Narendra Modi and President Xi Jinping would happen soon. It is assumed that such a meeting would be in the trilateral RIC (Russia-India-China) format.

So far there is no concrete proof that anything is afoot. But a Russian initiative to break the ice between two of its close friends- India and China makes sense. Last summer’s incursions into Ladakh by the PLA had led to a military confrontation and the death of 20 Indian and an unspecified number of Chinese soldiers. Talks at the field commanders and diplomatic levels had led to some degree of lowering of temperatures. Yet the Chinese have refused to go back from two crucial positions and the stalemate has persisted. Both Indian and Chinese troops are holding positions in the freezing winter cold. Foreign minister Subramanyam Jaishankar and China’s Wang Yi in Moscow and Dushanbe had not led to a breakthrough. Many believe there has to be intervention at the highest political level, meaning between Modi and Xi for the issue to be resolved satisfactorily on both sides.

When Russians were asked during the SCO meeting in September 2020 whether Moscow would take on the role of a mediator, foreign minister Sergey Lavrov had said India and China were mature powers and were perfectly capable of resolving the issue themselves. But since the stand-off has continued, Moscow appears to have a change of heart. Last week’s remarks by the Kremlin official confirms that Russia is keen to call a RIC summit.

The MEA has given no such hint. Asked during a weekly briefing to comment on the Russian aides remarks, spokesman Arindam Bagchi said he had no information and could not comment on what another country’s official had said.

While telephone calls between leaders is part of diplomacy, doing so, soon after a face to face meeting on December 6, is surprising. Tension over Ukraine has little to do with India. The press release gave no hint that anything more than bilateral ties was on the agenda.

"In their conversation, the two leaders followed up on some of the issues discussed during the recent visit to India by H.E. President Putin. The exchange today helped firm up the future course of action on these issues, including opportunities for furthering defence cooperation, cooperation in supply of fertilizers, enhancement of India's engagement with the Russian Far East. The conversation also allowed an exchange of views on international issues,’’ the bland statement issued by MEA said.

"The leaders agreed to remain in regular touch on all aspects covered under the India-Russia Special and Privileged Strategic Partnership," the statement added.

The statement is a reiteration of what happened in the summit. It is likely that Putin wanted to get Modi’s views on a future meeting with Xi . Whether it will finally come about remains to be seen, but Putin is likely to have sent out a feeler to Modi.ends