The Modi-Putin meet was a concerted effort by India-Russia to tell the world that their strategic relationship is alive and kicking. 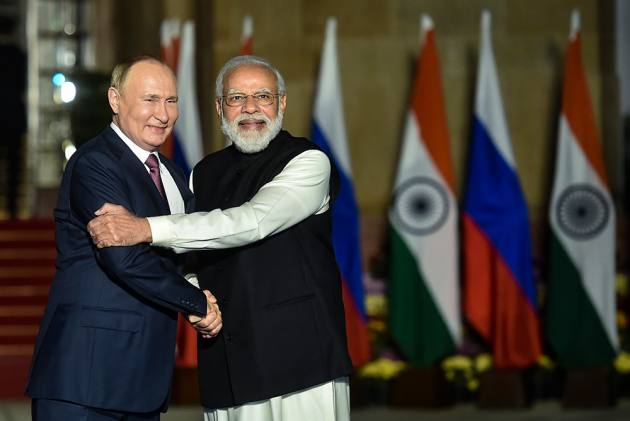 India and Russia once again proved the point that despite New Delhi’s tango with the US and Russia’s blossoming friendship with China, neither are about to abandon the traditional India-Russia ties that have served both nations well in the past. Prime Minister Narendra Modi and President Vladimir Putin sat down for their annual Modi-Putin summit Monday evening to review bilateral India-Russia ties and exchange views on important regional issues as well as their perception of international developments. Earlier in the morning, Foreign and Defence ministers of India and Russia had already held detailed discussions and signed 28 agreements. Foreign ministers Subramanyam Jaishankar and Sergey Lavrov together with Defence minister Rajnath Singh and Sergei Shoigu met for the first time as the 2+2 format came into play.

President Putin flew in especially for the summit at a time when tension is escalating over Ukraine and speculations over a possible threat of war looming over the region. On Tuesday, President Putin and President Joe Biden are scheduled to have a virtual meeting to avoid a further escalation of the situation in Europe. President Putin is in Delhi for a few hours for the meeting and is flying back immediately afterwards.

Prime Minister Narendra Modi is well aware of the effort made by Putin to take time off from the crisis to personally travel to Delhi for the summit. The personal warmth was apparent in the Indian Prime Minister’s opening remarks, “My dear friend President Vladimir Putin, warmly welcome you to the 21st India-Russia Annual Summit, welcome your delegation. I know this is your second foreign trip in the last 2 years during the Corona period. The way you have attachment to India, it is a kind of symbol of your personal commitment and it shows the importance of India-Russia relations and for this I am very grateful to you.”

The first trip outside Russia for Putin was for a meeting with Joe Biden in Geneva. Again, Modi referred to 2021 as an important year in India-Russia ties, as it marks the 50-years of the 1971 Treaty of Peace, Friendship and Cooperation. It was Putin who suggested upgrading ties to a strategic partnership and the Prime Minster acknowledged this when he said, “It is my pleasure to be with you again in this special year because you have been the main driver of the remarkable progress our Strategic Partnership has made over the past 20 years.”

Modi went on to say, “There have been many fundamental changes at the global level in the last several decades. A variety of geo-political equations have emerged. But India-Russia friendship has been a constant among all these variables. Both the countries have not only cooperated with each other without any hesitation but have also taken special care of each other's sensitivities. It is truly a unique and reliable model of inter-state friendship.”

President Putin reciprocated Modi’s warmth by saying, “India is our longstanding friend. Trade between the countries has increased this year. We see India as a great power and our military ties are unparalleled...India-Russia bilateral trade has risen by 38% working together on various sectors including energy and space…”

Later briefing the media, foreign secretary Harsh Vardhan Shringla described Putin’s visit as “short but effective.” He said that 28 agreements, including MoUs were signed during the day at the 2+2 meet. The most important is the 10-year military and technical cooperation agreement for the period 2021-2031. This replaces the earlier 2011-2020 Defence pact. An agreement to manufacture AK-203 assault rifles in Uttar Pradesh was also signed. The factory to produce six lakh rifles will be in Amethi. Besides these, 70,000 rifles for immediate use will be bought off the shelf. A protocol for amending the agreement on Kalashnikov Series of Small arms was also one of the Defence deals signed earlier in 2018. The joint venture will tie in with Modi’s make in India program and lead to transfer of technology. After the meeting with his Russian counterpart Sergei Shoigu, Defence minister Rajnath Singh tweeted that the two had a “productive, fruitful and substantial bilateral discussion on Defence cooperation.”
He also said, “India values its special and privileged strategic partnership with Russia,” adding “India deeply appreciates Russia’s strong support for India.”

It is significant that despite Russia’s growing relations with China, Moscow went ahead in 2020 to supply the spare parts the Indian army needed in Ladakh against the PLA troopers. Singh was possibly referring to that in his tweet of appreciation for Russia.

Apart from Defence, Space, and Energy, the usual segments of cooperation, emphasis this time was also on improving trade and economic ties through investment of private business. Thirteen key sectors were marked out for special attention following the “positive trajectory in trade figures this year.”

While discussing regional and international issues Afghanistan was very high on the agenda. India and Russia are in close touch on Afghanistan and want to ensure that radical elements do not again use Afghanistan territory to push terrorists to neighbouring central Asian countries and India. On terrorism and cross-border terror, India and Russia are on the same page, the foreign secretary said during his briefing.

Asked about Russian concerns on the quad, the foreign secretary did not give a direct answer but said India and Russia were also cooperating in the Indo-Pacific through the Chennai and Vladivostok Maritime Corridor, whatever that meant. It is a fact that Moscow is unhappy about the quad just as India is about Moscow’s growing rapport with China, but the political leadership has learned to live with these dalliances and will not affect overall ties between India and Russia.

Asked whether India and China discussed the US sanctions that come into play for Delhi’s purchase of the $400 Missile Defence system, Shringla said that the deal was in the making from 2018, much before the sanctions came into existence. He also added that “We conduct an independent foreign policy,” meaning neither Russia nor India could take dictation from another country.

Overall, the short summit ended on a satisfactory note for both countries. As PS Raghavan, a former Indian ambassador to Moscow said, “This was a concerted effort by India and Russia to tell the world that their strategic relationship is alive and kicking,” and added, “We have convergence on several key issues, there are also some differences, but not something the leaders cannot manage. It is also a display of India’s strategic autonomy.”