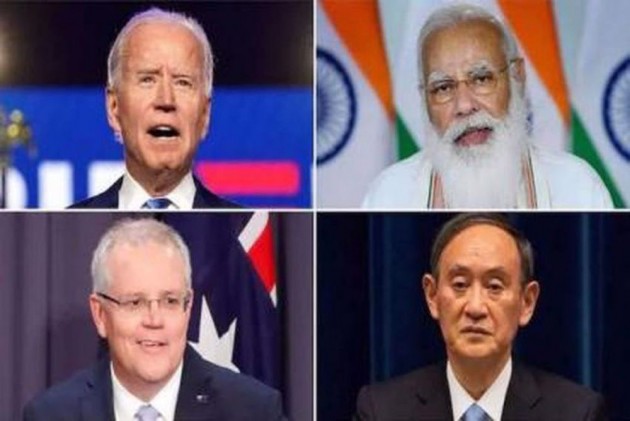 Recounting the recently-conducted Quad summit as a "historic" moment, a senior American diplomat has said that the strategic collaboration of the four countries is uniquely positioned to help lead the Indo-Pacific region towards a more positive vision.

"Quadrilateral Security Dialogue" or Quad is an informal strategic grouping comprising of the United States, India, Australia, and Japan. The leaders of the four countries have met periodically since its establishment in 2007 for a smooth international order in the Indo-Pacific and countering growing Chinese assertiveness in the region.

Some Countries Should Get Rid Of Cold-War Mentality And Stop Forming Small Cliques: China On Quad Summit

"The Quad is uniquely positioned to help lead the Indo-Pacific towards the more positive vision we all seek,” Atul Keshap, Principal Deputy Assistant Secretary of State for East Asian and Pacific Affairs said in his virtual address to the Perth USAsia Center and US Studies Center Conference on Tuesday.

Australia and the United States are engaging in substantial regional multilateralism to work together on many issues facing the region, he said.

"Last week’s Quad summit was a historic moment and showcased the Quad’s ability to pool our capabilities and build habits of cooperation to address the world’s most urgent problems together,” Keshap said.

The Biden administration is looking forward to deepening cooperation on combating Covid-19 and climate change, he said, adding that Biden is deeply focused on the issue of expanding global vaccination, manufacturing, and delivery, which will all be critical to end the Covid-19 pandemic.

The Quad’s Covid-19 engagement is a joint partnership to boost vaccine manufacturing and strengthen vaccinations to benefit the Indo-Pacific, he said.

"We are also looking forward to working together on emerging technologies and messaging the positive impacts of Quad cooperation in the Indo-Pacific,” Keshap said.

"In addition to the key Summit deliverables on Covid-19, climate, and emerging technologies, the Quad will continue to advance coordination on issues including economic recovery, climate change, humanitarian assistance and disaster relief, maritime security, counter terrorism, and countering disinformation,” he said.

In his address to Quad leaders on Friday, Biden said it was going to be a vital arena for cooperation in the Indo-Pacific region. He also described Quad as a new mechanism to enhance cooperation and raise mutual ambition as they address accelerating climate change.

China is engaged in hotly contested territorial disputes in the South and East China Seas. Beijing has also made substantial progress in militarising its man-made islands in the past few years.

Beijing claims sovereignty over all of the South China Sea. But Vietnam, Malaysia, the Philippines, Brunei and Taiwan have counterclaims. In the East China Sea, China has territorial disputes with Japan.

Both maritime areas in the South and East China seas are rich in minerals, oil and other natural resources and are also vital to global trade.

In November 2017, India, Japan, the US, and Australia gave shape to the long-pending proposal of setting up the Quad to develop a new strategy to keep the critical sea routes in the Indo-Pacific free of any influence.