'The leaders agreed that they would meet in-person before the end of the year,' US National Security Advisor Jake Sullivan said hours after the maiden virtual Quad summit. 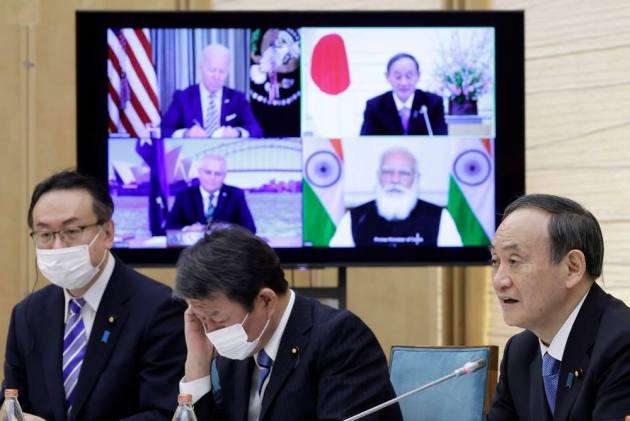 The White House on Friday said that the Quad leaders from Australia, India, Japan and the US would hold an in-person summit later this year following their historic virtual summit.

The leaders addressed key regional issues, including freedom of navigation and freedom from coercion in the South and East China Seas, the North Korea nuclear issue and the coup and violent repression in Myanmar, Sullivan told reporters at a White House news conference.

'It's Great To See You': US President Biden To Modi At First Virtual Quad Summit

They also spoke to the competition of models between autocracy and democracy and expressed their confidence that despite setbacks and imperfections, democracy is the best system to deliver for people and to meet the economic, social and technological challenges of the 21st century, he said.

“Over the course of the meeting, a sense of optimism for the future, despite the hard times we're in, was on full display.

“The four leaders did discuss the challenge posed by China, and they made clear that none of them have any illusions about China, but today was not fundamentally about China,” Sullivan noted.

Much of the focus was on pressing global crises, including the climate change and COVID-19. With respect to COVID-19, the four leaders made a massive joint commitment, he told reporters.

“With Indian manufacturing, US technology, Japanese and American financing and Australian logistics capability, the Quad committed to delivering up to 1 billion doses to ASEAN, the Indo-Pacific and beyond by the end of 2022,” said the top American national security advisor.

“The leaders also agreed that they would meet in-person before the end of the year, and they launched a set of working groups, including an emerging technology group that will help set standards in key technologies like 5G and artificial intelligence, and another on cyber that will help our four countries meet this growing threat. These groups will deliver results by the time of the summit that will happen before the end of the year,” Sullivan said.

“The Quad, at the end of the day, at the end of today, is now a critical part of the architecture of the Indo-Pacific, and today's summit also kicks off an intensive stretch of diplomacy in the region,” he said.

Secretary of State Tony Blinken and Defence Secretary Lloyd Austin will travel to Japan and South Korea to meet with their counterparts in a 2-plus-2 format, he noted.

While Austin would head to India after that, Blinken and he would be meeting their Chinese counterparts in Anchorage, Alaska at the same time, next week, Sullivan said.

“Make no mistake; today is a big day for American diplomacy. This summit is a big deal for the president and for the country, and we are looking forward to the work ahead,” Sullivan said.

Responding to a question, Sullivan said that the four leaders discussed both the recent cyber-attacks and semiconductors in the course of the conversation.

The leaders agreed as part of the emerging technology working group to look at this supply chain question, including as it relates to semiconductors, to make sure that they don't have shortages of critical materials going forward, whether it's semiconductors or rare earths.

“And with respect to cyber, the impetus behind this new cyber working group is not just the SolarWinds incident or the Microsoft Exchange incident, both of which the United States is responding to with urgency, but also cyber-attacks that have hit Japan, India and Australia just in the past few weeks and months. This is a common challenge that we face from both state actors and non-state actors, and we do intend to make the Quad a central vehicle for cooperation on cyber,” Sullivan added.