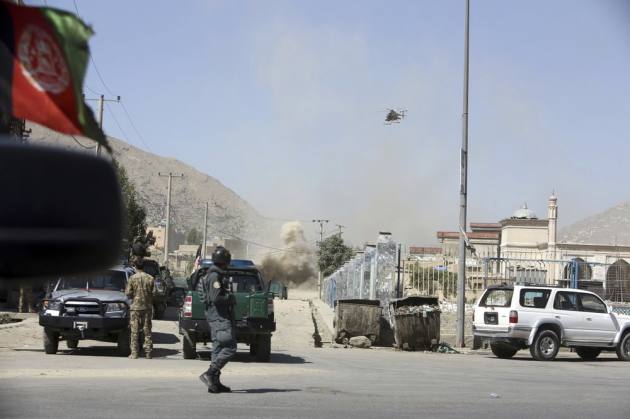 Rockets struck a neighbourhood near Kabul's international airport on Monday amid the ongoing US withdrawal from Afghanistan. It wasn't immediately clear who launched them.

A witness who spoke on condition of anonymity for fear of reprisals said they heard the sound of three explosions and then saw a flash, like fire, in the sky.

People fled after the blasts, the witness said.

U.S. officials did not immediately respond to requests for comment. U.S. military cargo planes continued their evacuations at the airport after the rocket fire.

On Sunday, a U.S. drone strike blew up a vehicle carrying “multiple suicide bombers” from Afghanistan's Islamic State affiliate on Sunday before they could attack the ongoing military evacuation at Kabul's international airport, American officials said. An Afghan official said three children were killed in the strike.

The U.S. is to withdraw from Afghanistan by Tuesday. By then, the U.S. is set to conclude a massive two-week-long airlift of more than 114,000 Afghans and foreigners and withdraw the last of its troops, ending America's longest war with the Taliban back in power.

The U.S. State Department released a statement Sunday signed by around 100 countries, as well as NATO and the European Union, saying they had received “assurances” from the Taliban that people with travel documents would still be able to leave the country. The Taliban have said they will allow normal travel after the U.S. withdrawal is completed on Tuesday and they assume control of the airport.

However, Afghans remain fearful of the Taliban returning to the oppressive rule for which it was once known. There have been sporadic reports of killings and other abuses in the sweep across the country.

Earlier this week, an Islamic State suicide attack outside the airport killed at least 169 Afghans and 13 U.S. service members. The U.S. carried out a drone strike elsewhere in the country on Saturday that it said killed two members of the Islamic State's local affiliate in Afghanistan, which has battled the Taliban in the past.