The local branch of the Islamic State group said it downed the plane over Sinai in October 2015, shortly after the aircraft took off from the Red Sea resort of Sharm el-Sheikh. 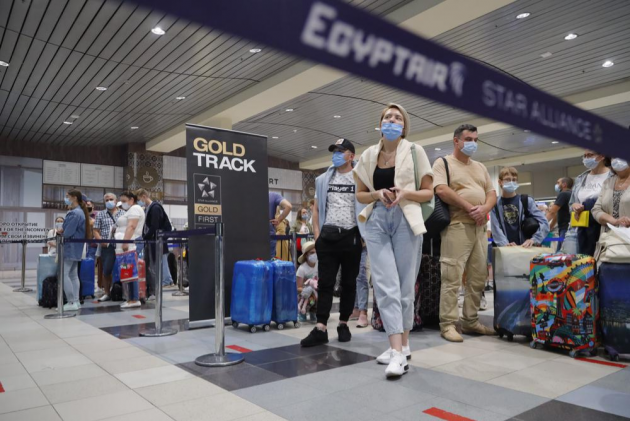 Russia resumed flights to Egyptian resorts on the Red Sea on Monday, ending a ban that had lasted around six years following the bombing of a Russian airliner that killed all 224 people onboard.

The local branch of the Islamic State group said it downed the plane over Sinai in October 2015, shortly after the aircraft took off from the Red Sea resort of Sharm el-Sheikh. At the time, Russian officials insisted that security procedures at Egyptian airports were insufficient.

Early on Monday morning, EgyptAir flight MS724 took off from Moscow with 300 tourists. Hours later, the Airbus A300-330 landed in Hurghada, a popular Red Sea destination, Egypt's national carrier said in a statement.

The Russian plane was welcomed by a ceremonial “water salute" on touchdown and Russian tourists, most of them wearing facemasks, were greeted with flowers and balloons upon disembarking.

The statement said EgyptAir would operate seven flights from the Russian capital to Hurghada and Sham el-Sheikh, on the tip of the Sinai Peninsula. The first EgyptAir flight from Moscow to Sharm el-Sheikh was scheduled for Tuesday, it said.

The Russian state aviation agency, Rosaviatsiya, has cleared eight Russian airlines to operate flights to Hurghada and Sharm el-Sheikh from 43 cities across Russia. However, the list does not include St. Petersburg, the destination of the doomed Russian airliner downed over Sinai.

For now, Rossiya, a subsidiary of the Russia's state-owned flagship carrier Aeroflot, appears to be the only Russian airline with scheduled flights to the two Egyptian Red Sea resorts from Moscow's Sheremetyevo airport. Its flight FV5361 is scheduled to land in Hurghada early on Monday afternoon and the flight FV5633 is to land in Sharm el-Sheikh an hour and a half later.

Other Russian airlines cleared to operate flights from Moscow to Hurghada and Sharm El Sheikh — such as Aeroflot's low-cost subsidiary Pobeda and S7 Airlines, Russia's largest privately owned carrier — have no flights scheduled for the coming days, according to their websites.

The development comes a month after Russian President Vladimir Putin canceled his order suspending the flights after the 2015 disaster.

Flights between Moscow and Cairo resumed in April 2018 after Egyptian officials beefed up security at Cairo's international airport, but talks about restoring direct air travel to Red Sea resorts had dragged on. In 2016, Egypt's President Abdel Fattah el-Sissi finally said the downing of the Russian airliner was a “terrorist attack."

Russia's ambassador to Egypt, Georgy Borisenko, said the decision to resume flights was not an easy one for Moscow.

“However, we ascertained that in recent years Egypt's airports and resorts have dramatically increased security measures. Therefore, we expect that Russian tourists, who remember the traditional Egyptian hospitality well and miss the Red Sea very much, will have a safe and comfortable stay,” Borisenko was quoted by the state RIA Novosti news agency as saying.

Britain, another major source of visitors to Egypt which had also suspended flights to Sharm el-Sheikh in the wake of the bombing, lifted its restrictions in October 2019.

The 2015 attack was a serious blow to Egypt's vital tourism industry, which was also affected by the unrest following its 2011 Arab Spring uprising. Egyptian authorities have since spent millions of dollars upgrading security at the country's airports, hoping to get Moscow to change its mind.

The resumption of flights will be key for Egypt's tourism sector, which was dealt another blow by the coronavirus pandemic over the past year. Authorities have kept looser restrictions in Red Sea towns, trying to attract foreign visitors. But they have mandated vaccinations for workers in the tourism sector in Red Sea resorts, though a vaccination campaign has been slow elsewhere in Egypt. All foreign visitors, however, have to show a negative PCR test and wear facemasks.

Prior to the ban, Russians were the top visitors to Egypt, numbering about 3 million tourists in 2014. (AP)