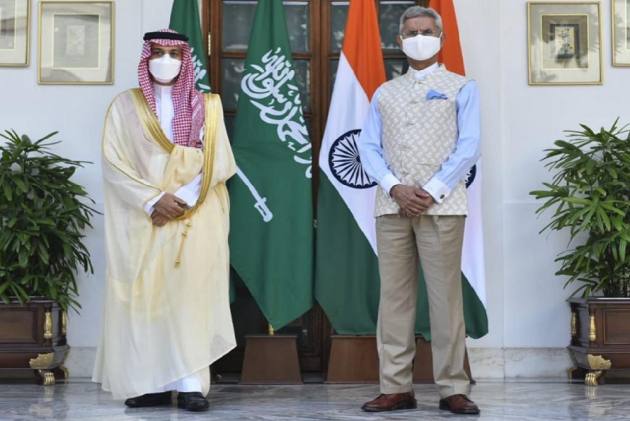 Soon afterward, Jaishankar tweeted, “A cordial and productive meeting with Saudi FM HH@Faisalbinfarhan Discussed our cooperation in the political, security and socio-cultural pillars of our strategic partnership. Very useful exchange of views on Afghanistan, the Gulf and the Indo-Pacific.’’

Though India and most of the Gulf kingdoms have had centuries of traditional trading ties, political relations were never warm. Successive governments in India felt that Saudi Arabia was an ally of arch-foe Pakistan and did not invest time and energy in cultivating Riyadh. Yes India bought oil from the region and its people went to the Gulf and sent back precious dollars.

But in the last two decades with the winds of change blowing across the world, both New Delhi and the Gulf kingdoms broke out of the mould and began exploring new engagements. It began during former prime minister Vajpayee’s time and continued through the two terms of the UPA government. But when Narendra Modi came to power in 2014, he began to aggressively court the Gulf kingdoms. He made several visits to each of the Gulf countries and built solid political ties with Saudi Arabia and the UAE.

A cordial and productive meeting with Saudi FM HH @Faisalbinfarhan.

Discussed our cooperation in the political, security and socio-cultural pillars of our strategic partnership.

Very useful exchange of views on Afghanistan, the Gulf and the Indo-Pacific. pic.twitter.com/0cYq6I5VUU

The move paid off handsomely. When India scrapped Kashmir’s special status in August 2019, Saudi Arabia and the UAE did not join Pakistan, Turkey or Malaysia to publicly denouncing the move and attack India’s human rights record. So much so that Pakistan’s ties with Saudis became strained as Riyadh refused to back Islamabad’s call for convening a special session of the Organisation of Islamic Cooperation foreign ministers to discuss Kashmir. This was also because of the rivalry between Turkey and Saudi Arabia. Riyadh see’s itself as the rightful voice of Sunni Muslims across the world as the custodian of Islam’s holiest shrines in Mecca and Medina. It will not tolerate Turkey or Malaysia usurping its premier position in the Muslim world.

India’s ties have grown substantially after 2014 with a regular flow of high-level visits. In today’s meeting between the two foreign minister’s developments in neighbouring Afghanistan was discussed at length. They also reviewed growing economic co-operation between the two countries. During the visit of the Saudi Crown Prince Mohammed bin Salman, commonly referred to as MBS, in February 2019, he spoke of investing a $100 billion in India over two years.  The pandemic has naturally slowed the process.

At present India and Saudi Arabia have a near convergence of views on the Taliban. Riyadh is as concerned as New Delhi about stabilising Afghanistan and ensuring that terror groups do not use its territory to launch strikes against other nations. The Saudi ruling house is paranoid about the Al Qaeda as well as the ISIS and other Islamic militant groups that hate the kingdoms rulers for their close ties with the US.

During the Taliban’s first tenure, the three countries that recognised the Kabul government were Saudi Arabia, Pakistan and the UAE.

But Saudi Arabia has been upstaged by Qatar in Afghanistan. Qatar hosted the Taliban in Doha and allowed them to operate from an office in the capital. Qatar played a key role in the negotiations of the Taliban group with the US and other powers.