Amid Massive Opposition, Senate Democrats Press Ahead On Voting Bill

Democrats have made the elections bill a major focus, touting it as the best way to counteract voting restrictions that have advanced in Republican-controlled statehouses across the US 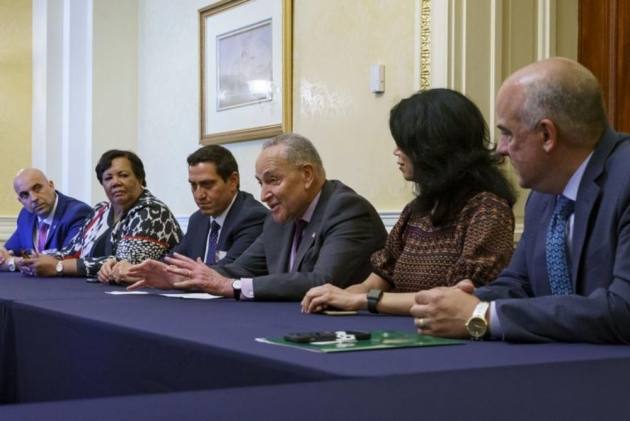 Senate Democrats pledged Tuesday to forge ahead with a likely doomed vote on their sprawling elections and voting bill next week, even as it faces universal opposition from Republicans, as well as from a key senator in their own party.

Democrats have made the elections bill a major focus, touting it as the best way to counteract voting restrictions that have advanced in Republican-controlled statehouses across the U.S. in the wake of Donald Trump's false claims about a stolen 2020 election.

With a vote nearing, a delegation of Texas state legislators met with senators Tuesday to make the case for congressional action.

The legislators talked about their dramatic walkout last month, which effectively blocked Republicans in the Texas legislature from approving new voting limits.

Yet Sen. Joe Manchin, a key holdout on the elections legislation, did not attend the lunch. And with Republicans united against the measure, Democrats seemed to be careening toward a failed vote next week that is certain to add to the frustrations of liberal activists and others in the party who fear that a chance to safeguard access to the ballot is slipping away.

Many of them say Democrats should change the Senate's filibuster rules to muscle the bill through, but Manchin and others are against taking that step.

Sen. Majority Leader Chuck Schumer, D-N.Y., vowed to press ahead. He said Democrats will hold a special meeting later this week to discuss the path forward. “We have to get it done,” Schumer said.

Schumer said Republican legislatures “are passing the most draconian restrictions since the beginning of Jim Crow, potentially disenfranchising tens of millions of Americans."

The Democrats' bill would bring about the largest overhaul of U.S. voting in a generation, touching nearly every aspect of the electoral process. It would remove hurdles to voting erected in the name of election security, like voter ID laws, while curtailing the influence of big money in politics.

It would create a nonpartisan process for redrawing congressional districts, while expanding mail voting and early voting, while restoring the rights of felons to cast a ballot, among scores of other provisions.

Passing the bill was always going to be a huge lift in an evenly split 50-50 Senate, where Vice President Kamala Harris can cast tie-breaking votes. Senate procedural rules require 60 votes to overcome a filibuster, and Republicans are united against the bill, calling it a power grab.

“The core desire they have is to federalize all elections to try to achieve a benefit to the Democrats at the expense of the Republicans,” Senate Minority Leader Mitch McConnell, R-Ky., said Tuesday. “Not surprisingly, there will not be a single Republican who supports it.”

Manchin, a moderate West Virginia Democrat, has also said he would vote against the bill because it doesn't have bipartisan support.

What exactly will be palatable to Manchin, however, remains unclear. He supported previous versions of the bill and has said that action on voting rights is needed.

He is also supposed to provide a list of criteria that he would support or oppose to Senate leadership, though it's unclear if he has done so.

Manchin has pushed for Democrats get behind a narrower piece of legislation that updates the Voting Rights Act to reinstate a requirement that new voting laws and legislative districts be subject to federal approval. His proposal would for the first time impose those requirements on all 50 states. But that bill also lacks support from Republicans, with only Alaska Sen. Lisa Murkowski supportive of the effort.

The voting rights bill “protects us in the current elections and must pass now," Pelosi said in a letter to colleagues.

The update to the Voting Rights Act, she wrote, “is the foundation for future elections and must be passed in a way that is constitutionally ironclad. Any premature passage could be very damaging to its success.”

Pelosi spoke several times with Manchin about the bill over the weekend, according to a senior Democratic aide who was granted anonymity to confirm the private calls. An aide to Pelosi declined to comment on their discussions.