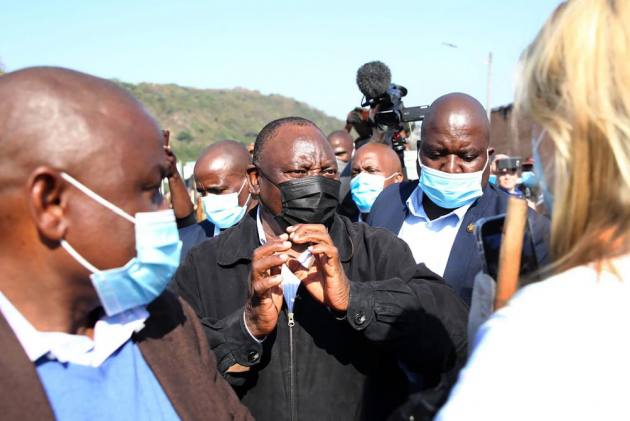 Standing at the entrance to a looted mall and surrounded by soldiers, South African President Cyril Ramaphosa vowed Friday to restore order to the country after a week of violence set off by the imprisonment of former President Jacob Zuma.

Visiting the port city of Durban in the hard-hit KwaZulu-Natal province, Zuma's home area, Ramaphosa said the chaos and violence in which more than 200 people died had been “planned and coordinated” and that the instigators will be prosecuted.

“We have identified a good number of them and we will not allow anarchy and mayhem to just unfold in our country,” he said.

As army tanks rolled by the trashed Bridge City mall, Ramaphosa said the deployment of 25,000 troops would end the violence and rampant theft in KwaZulu-Natal and Gauteng provinces.

South Africa's unrest erupted after Zuma began serving a 15-month sentence for contempt of court for refusing to comply with a court order to testify at a state-backed inquiry investigating allegations of corruption while he was president from 2009 to 2018.

More than 2,500 people have been arrested for theft and vandalism and 212 people have died, Khumbudzo Ntshavheni, acting minister in the presidency, said Friday. Many were trampled to death when shops were looted, according to police.

The army rollout in KwaZulu-Natal is expected to restore order in the coastal province within a few days. An uneasy calm has been secured in Gauteng province, which includes Johannesburg, South Africa's largest city and industrial hub.

“The country is gradually but firmly returning to normal,” Ntshavheni said during a daily news briefing on the crisis.

In a sign of a return to stability, two strategic highways linking Durban port to Johannesburg and Cape Town reopened Friday after being closed for a week, Ntshavheni announced.

South Africa's unrest first flared at the Mooi River toll gate for the N3 highway, where more than 20 trucks were burned.

The military will patrol the highways but drivers are warned to use the road with care.

“It is vitally important to proceed with extreme caution and to stay alert at all times," said the highway authority in a tweet Friday.

The highways are vital to transport routes carrying fuel, food, and other goods.

Authorities will work to reopen the rail line to the strategic Indian Ocean ports of Durban and Richard's Bay that was also closed by the unrest, she said.

One of the country's biggest food manufacturers, Tiger Brands, said it has stopped baking and food production operations at its most affected sites in KwaZulu-Natal. The company said it had lost stock worth close to 150 million rands (about USD 10 million) in the violence.

There has been an increase in people trying to spend cash stained with green dye, evidence that the money was stolen from the hundreds of ATM machines broken into during the riots, according to the South African Banking Risk Information Center, which warned that the notes won't be honoured.

To restore respect for the law, the South African Council of Churches has proposed that the government declare a limited amnesty of two weeks when people can return stolen property to the police and will not be charged.

“We need leaders of all faiths everywhere, civic and community leaders, traditional leaders in rural communities, and business and trade unions in the workplace, all of us to pull together and chart a path of restoration,” Bishop Malusi Mpumlwana, general secretary of the ecumenical group, wrote in an open letter.

“The soul of the South African society will be built from the ashes of shame that we are witnessing.”

Swift action must be taken against those who plotted the strategic attacks, said Ronnie Kasrils, veteran anti-apartheid leader and former Cabinet intelligence minister.

“This unrest is coming to be seen by government and intelligence services and the president as an actual plot by a group in support of Jacob Zuma ... to unleash civil disorder and really to bring the country to its knees,” said Kasrils.

“There has been a great degree of planning and plotting ... There is the need to root out the plotters and bring forward the allegations, the evidence.”