'And I'll just give you one example that shows you the difference between him and a king, which is the Constitution says there can be no titles of nobility. So, while the president can name his son Baron, he can't make him a baron,' Professor Karlan said amidst laughter from the audience. 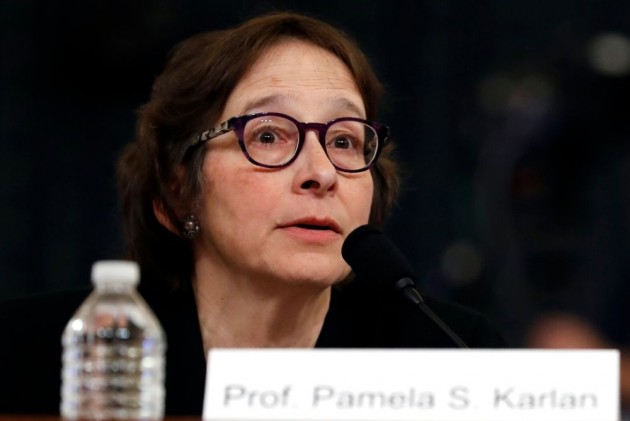 The impeachment hearing against President Donald Trump took an ugly turn when a professor of law from the prestigious Stanford took the name of his son Barron during her testimony before a Congressional panel.

It all started in response to a question from Congresswoman Sheila Jackson Lee.

“So, kings could do no wrong because the king's word was law. And contrary to what President Trump has said, Article 2 does not have--give him the power to do anything he wants,” she said.

“And I'll just give you one example that shows you the difference between him and a king, which is the Constitution says there can be no titles of nobility. So, while the president can name his son Baron, he can't make him a baron,” Karlan said amidst laughter from the audience. Republican Congresswoman Matt Gaetz confronted Karlan about her using the name of Barron during the hearing.

“When you invoke the president's son's name here, when you try to make a little joke out of referencing Baron Trump, that does not lend credibility to your argument. It makes you look mean,” she said.

“It makes you look like you're attacking someone's family, the minor child of the president of the United States,” Gaetz said.

First Lady Melania slammed Karlan for invoking her son during the hearing.

“A minor child deserves privacy and should be kept out of politics. Pamela Karlan, you should be ashamed of your very angry and obviously biased public pandering, and using a child to do it,” the First Lady said in a tweet.

The First Lady was joined by the White House Press Secretary Stephani Grisham on twitter.

“Classless move by a Democratic 'witness'. Prof Karlan uses a teenage boy who has nothing to do with this joke of a hearing (and deserves privacy) as a punchline,” she said.

“And what’s worse, it’s met by laughter in the hearing room. What is being done to this country is no laughing matter,” Grisham said.

“The worst part is it was obviously rehearsed beforehand,” Grisham said in another tweet.

Karlan later apologised for her remarks.

“I want to apologise for what I said earlier about the president's son. It was wrong of me to do that. I wish the president would apologise, obviously, for the things that he's done that's wrong. But I do regret having said that,” Karlan said during the hearing later in the day.