The Suez Canal accounts for about 30 per cent of global container ship traffic each day. 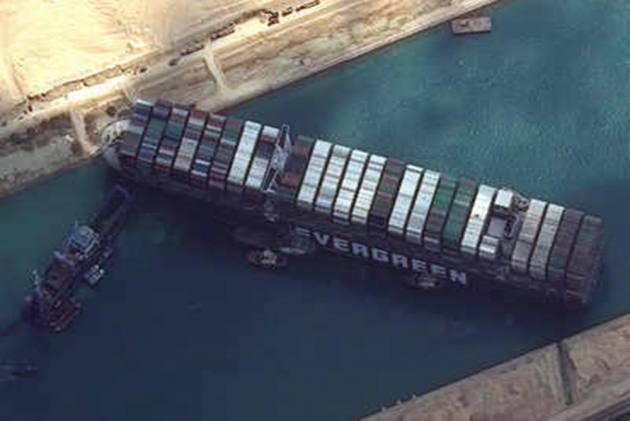 From coffee and toilet paper to sex toys, furniture and other imported goods – We can expect to witness a shortage as a large container ship, ‘Ever Given’ remains stuck in Egypt’s Suez Canal, the busiest waterway in the world.

According to a Business Insider report, the Suez Canal accounts for about 30 per cent of global container ship traffic each day.

Depending on how long it takes to move the giant 224,000-ton ship – said to be bigger than the Empire State Building – that ran aground on Tuesday, consumers could see a shortage of numerous items across the world. If the ‘Ever Given’ is not freed soon, the logjam could impact the oil market, shipping and container rates, leading to a rise in the cost of everyday goods. It will affect “basically anything you see in the stores,” Lars Jensen, an independent container-shipping expert based in Denmark, told NBC News.

About 12 per cent of global trade moves through the Suez Canal, the Egyptian waterway that connects Europe and Asia.

The Suez Canal blockade will be impacting the coffee supply. It has blocked shipping containers full of the type of coffee used in Nescafe instant, reported news agency Bloomberg. A coffee shortage would likely be felt more keenly in Europe but could reverberate worldwide, as the waterway is blocking key shipments between Vietnam and Europe, Bloomberg reported. It could soon affect coffee availability in stores and cafes, especially considering that coffee companies have been feeling the pinch of shipping-container shortages for the past few months, the report said.

According to Bloomberg, one of the biggest producers of the pulp used to create toilet paper, Suzano SA, has been stuck in the jam, as a result, the availability of toilet paper in stores will be affected. Some people have taken to stockpiling toilet paper and household goods because of the coronavirus pandemic. Toilet-paper prices may also go up as port delays even outside the Suez Canal increase the price of shipping overseas.

Shoppers are already seeing furniture-delivery dates delayed for several months. During a third-quarter earnings call in February, La-Z-Boy executives said customers should expect delivery dates that are five to nine months out from the purchase date, the Business Insider report said. The delay in availability has been made worse by congestion at ports, especially in Southern California, a key drop-off for containers from Asia. The Suez blockage isn’t likely to help.

Gas prices may continue to skyrocket

Gas prices have skyrocketed over the past month as demand rises and OPEC has been slow to boost production. The Suez Canal blockage is likely to push prices higher still. Oil shipments going through the Suez Canal account for about 5 per cent to 10 per cent of global shipments, David Fyfe, the chief economist at Argus Media, told NBC News.