Tensions between Taiwan and China have risen to their highest level in decades, with China sending record-breaking numbers of fighter jets toward international airspace close to the island. 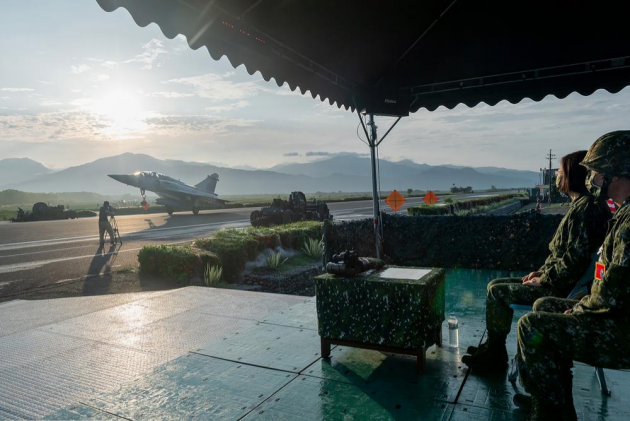 Taiwan's defense minister said Thursday that the island must defend itself and not depend entirely on others for help if China were to launch an attack, even as Taiwan's president said she had faith the US would defend it.

“The country must rely on itself, and if any friends or other groups can help us, then it's like I said before, we're happy to have it, but we cannot completely depend on it," the minister, Chiu Kuo-cheng, told reporters after being questioned in the legislature as part of a session on national defense.

Tensions between Taiwan and China have risen to their highest level in decades, with China sending record-breaking numbers of fighter jets toward international airspace close to the island, and stepping up a campaign of military harassment. Taiwan's Defense Ministry has said that China would have “comprehensive” capabilities to invade the island by 2025.

China claims Taiwan as part of its national territory although the island has been self-ruled since it split from the communist-ruled mainland in 1949 after a long civil war.

Chiu has called the rising tensions between China and Taiwan the most “severe” he has seen in 40 years.

Taiwan's President Tsai Ing-wen said in an interview with CNN that aired Thursday that she was confident the U.S. would defend Taiwan if China made a move against the island.

“I do have faith given the long term relationship we have with the U.S. and also the support of the people of the U.S. as well as Congress,” Tsai said.

Tsai also confirmed the presence of a small number of U.S. troops on the island to help train their Taiwanese counterparts.

Although the U.S. has no formal diplomatic relationship with the Taiwanese government, it has strong unofficial ties. Under the Trump administration, the U.S. stepped up weapon sales to Taiwan.

Further, the U.S. has a policy of “strategic ambiguity” toward Taiwan, where it has been deliberately vague about whether it would defend the island in the face of an assault. However, the U.S. also has a policy to support the island's self defense, including by providing it arms, as declared in the Taiwan Relations Act.

China's Ministry of Foreign Affairs spoke out against the confirmation of troops, saying it is “firmly opposed to any form of official contacts and military ties” between the U.S. and Taiwan, and that no one should “underestimate the strong determination, firm will and strong capacity” of China to defend its sovereignty.

Separately, the Chinese Defense Ministry said in a statement that China strongly opposes military exchanges between the U.S. and Taiwan and called on the U.S. to clarify the situation.

“If the U.S. continues to stubbornly cling to the illusion of using Taiwan to contain China... China will resolutely counter and fight back," Chinese Defense Ministry spokesperson Tan Kefei said at a press conference.

Last week, U.S. President Joe Biden seemingly contradicted the decades-long U.S. policy toward Taiwan when he said the U.S. was committed to protecting the island if China attacked it.

The White House later said Biden's comments did not represent a change in policy toward the island. (AP)