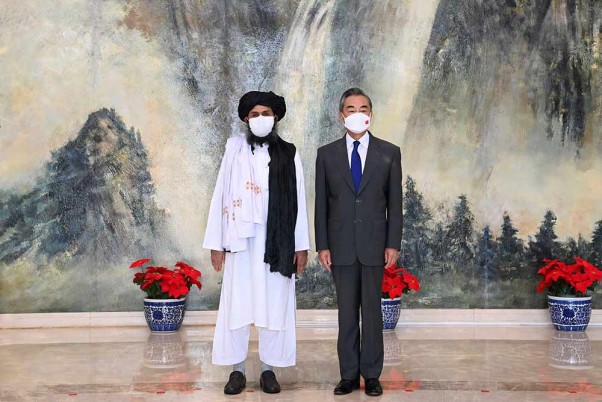 China, which has been striking what observers call a nuanced stand on the evolving situation in Afghanistan after its takeover by the Taliban,  said Afghanistan must not become a 'gathering place' for terrorism again.

Calling on the militant group to shun terrorism and form an inclusive Islamic government with all parties and ethnic groups, China has said Afghanistan should be supported in its resolute fight against the scourge after the Taliban insurgents swept to power in the war-torn country.

China is concerned as according to a recent UN report, hundreds of militants belonging to the East Turkistan Islamic Movement (ETIM) are converging in Afghanistan amidst the military advances made by the Taliban.

How Afghanistan-Trained Mujahideen Brought Terror To Bangladesh In The 1990s

Hibatullah Akhundzada To Mullah Baradar: Here’s The Who’s Who In Taliban Leadership

Twelve People Died In Kabul Airport Due To Stampedes Not Gunshots: An Eyewitness

A high-level Taliban delegation, headed by head of its Political Commission Mullah Abdul Ghani Baradar, which visited China last month during its talks with Chinese Foreign Minister Wang Yi promised not to permit the Uygur Muslim militant group from Xinjiang to operate from Afghanistan.

Reflecting on China’s anxieties, Wang in his phone talks with his Pakistani counterpart Shan Mahmood Qureshi on Wednesday called for the strengthening of cooperation between the two countries to deal with the evolving situation in Afghanistan.

“As important neighbours of Afghanistan and responsible countries in the region, China and Pakistan need to strengthen communication and coordination under the current circumstances and play a constructive role in supporting Afghanistan's stable transition and maintaining regional peace and stability,” Wang told Qureshi.

“We should encourage all Afghan parties to strengthen solidarity, and to establish a new broad-based and inclusive political structure that is suited to the Afghan national conditions, and supported by the Afghan people,” a press statement on the talks issued by the Chinese Foreign Ministry here on Thursday quoted Wang as saying.

“We should support Afghanistan in its resolute fight against terrorism, and Afghanistan must not become a gathering place for terrorism again,” he said.

Qureshi played down the growing anxieties both in Afghanistan and abroad about the Taliban’s takeover, saying it has not resulted in any bloodshed so far.

“Afghanistan needs a political settlement through negotiations in the future. That Kabul was taken over by the Afghan Taliban has not caused any bloodshed or casualties currently. The domestic situation in Afghanistan is moving towards stability and the people's life has gradually returned to normal,” he was quoted as saying in the Chinese Foreign Ministry statement.

Chinese Foreign Ministry spokesperson Hua Chunying on Friday, while replying to questions from the official media on whether China would recognise “Islamic Emirates of Afghanistan” as announced by its spokesman, said Beijing wants a broadly representative government in Kabul.

Zabiullah Mujahid, a spokesperson for the Taliban, announced the creation of a new state, the Islamic Emirate of Afghanistan, in a tweet on Thursday, according to Chinese official media reports.

Reacting to that, Hua said, "we have taken note of the Afghan Taliban's statement. We have also noticed that parties in Afghanistan are still holding consultations on the future political framework."

“China's position on the Afghan issue is clear and consistent. We hope that Afghanistan will gradually become open and inclusive and have a broadly representative government, pursue moderate and prudent domestic, foreign policies and meet the aspirations of its people and the expectations of the international community”.

Asked whether China will accept Afghans currently trying to flee from Kabul, Hua said the civil war in Afghanistan should be averted.

She said under the current circumstances, the top priority for the international community is to help and encourage different factions and ethnic groups in Afghanistan to strengthen solidarity, find an open and inclusive political framework that is accepted by the Afghan people and is in line with the people's interests and national conditions and achieves smooth political transition as soon as possible.

“Efforts should be made to avoid a new domestic war, humanitarian disaster and unnecessary casualties, and prevent causing a large number of refugees. This is the fundamental way out for the issue,” she said.

“We believe the most imperative thing in Afghanistan at the moment is for the international community to work together to help all the factions in the country to engage in dialogue and communication so that there will be no civil war or humanitarian disaster and to the greatest extent possible avoid unnecessary casualties or the result of large-scale refugees,” Hua said.

“That is the fundamental way out of the problem so the immediate task is to support all factions and ethnic groups in the country to be united and find an open and inclusive political structure in keeping with national realities,” she said.