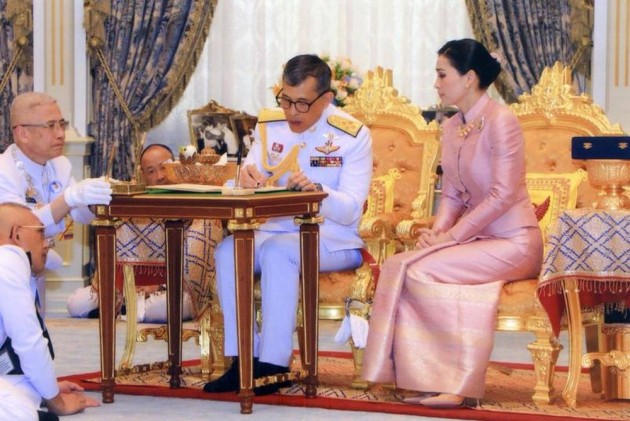 Thailand's Queen Suthida, the former deputy head of the royal bodyguard, made her first official public appearance Thursday at the side of Rama X, just days before his coronation.

On Thursday she was seen kneeling alongside the king as they paid their respects to statues of previous Chakri dynasty monarchs in Bangkok's historic quarter.

Harsh lese-majeste laws mean unguarded discussion about the monarchy inside Thailand is virtually impossible, and the kingdom's normally bubbly social media was subdued in reaction to the news of the nuptials.

She is widely reported to have been a Thai Airways flight attendant before joining the king's retinue, but little biographical information has been released by the palace.

Suthida has shadowed the king at public events as part of his personal security retinue for some time.

She was given the rank of "general" in 2016, and in June 2017 appointed deputy commander of the king's Royal Guard.

In April she was seen seated stonefaced behind him wearing a white uniform with a black tie and epaulettes as he addressed to police.

The unexpected news of the marriage has heightened curiosity around this weekend's coronation of the 66-year-old Vajiralongkorn, who as a result of the blasphemy laws also remains a mysterious figure to many Thais.

Photos of Suthida prostrating in respect to her husband at their wedding ceremony at Dusit Palace were widely used on newspaper front pages Thursday.

Vajiralongkorn, who has been married three times, is frequently abroad in Germany and closely shields details of his private life.

The last coronation in 1950 was for Vajiralongkorn's father, the deeply revered Bhumibol Adulyadej.

The government has released a detailed schedule of the three-day coronation which starts on Saturday, but it remains unclear what role Queen Suthida will play.