To Distract 4-Year-Old Daughter, This Syrian Father Teaches Her To Laugh Every Time A Bomb Drops

The 32-year-old Abdullah al-Mohamed, who along with his family had been forced to flee from his home in Saraqeb, said he devised the private game to help his daughter overcome her fear. 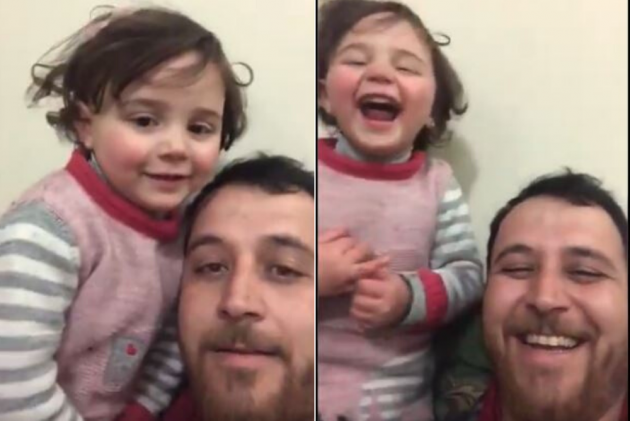 Salwa, a three-year-old girl from the Northwest Syrian province of Idlib, has only ever known war. But thanks to her father, now when she hears the sound of a bomb, she laughs.

In a video that has gone viral on social media, Salwa can be seen seated on a sofa with her father. “Is that a plane or is it a shell?” the father asks.  “A shell,” Salwa responds. “It'll fall now, and we can laugh," he adds.

As the sound of a blast fills the video, the toddler jumps into laughter and the father encourages her, laughing along. "That's funny, right? A shell?" he says with a smile on his face. As Salwa looks the other way, his smile fades away.

Speaking to Al-Jazeera, the 32-year-old Abdullah al-Mohamed, who along with his family had been forced to flee from his home in Saraqeb, said he devised the private game to help his daughter overcome her fear after the bombings intensified in December.

"Children in our neighbourhood used to play with bang snaps. One time during Eid, they threw them around to celebrate and Salwa was frightened by the noise," he said, adding, "I took her out to the balcony to show her that it was just a toy, a game kids play to celebrate Eid".

"I tried to use the same pretext to convince her that this was just a game, that she shouldn't be scared. I wanted her to associate these loud, frightening sounds to something that is light and amusing," al-Abdullah said.