Trump asserted that his administration will aggressively use economic sanctions to target those who enable, facilitate, and finance heinous acts in Syria. 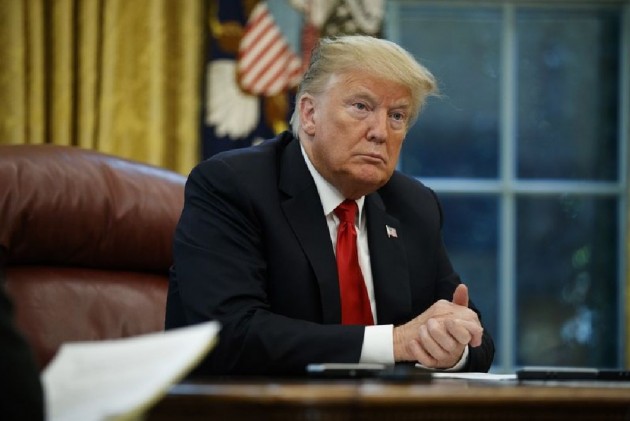 The US is ready to "swiftly destroy" Turkey's economy in response to the NATO ally's military offensive in northern Syria, President Donald Trump has said, as he imposed sanctions on Turkish ministries and senior officials, proposed to raise steel tariffs and end negotiations on a USD 100 billion trade deal with Ankara.

The Turkish offensive, which began last week, aims to push the Kurdish-led Syrian Democratic Forces (SDF) from the border region. Turkey considers the biggest militia in the SDF a terrorist organisation.

The Turkish government wants to create a "safe zone" in the area, where it can resettle up to two million Syrian refugees currently in Turkey.

Trump said he will be issuing the executive order authorising imposition of sanctions against current and former officials of Turkey and those contributing to destabilising Syria.

The order will authorise a broad range of measures, including financial sanctions, the blocking of property, and barring entry into the US, he said, adding that the US will immediately stop negotiations with Turkey on a USD 100 billion trade deal.

Steel tariffs will be increased back up to 50 per cent, the level prior to the reduction in May, Trump said.

"This (executive) order will enable the US to impose powerful additional sanctions on those who may be involved in serious human rights abuses, obstructing a ceasefire, preventing displaced persons from returning home, forcibly repatriating refugees or threatening the peace, security or stability in Syria," President Trump said in a statement.

Turkey's military offensive is endangering civilians and threatening peace, security and stability in the region, he said, adding that he has been perfectly clear with his Turkish counterpart that his action is precipitating a humanitarian crisis and setting conditions for possible war crimes.

Dozens of civilians have been killed in the operation so far and at least 160,000 have fled the area, according to the United Nations.

He asserted that his administration will aggressively use economic sanctions to target those who enable, facilitate, and finance heinous acts in Syria.

"Turkey must ensure the safety of civilians, including religious and ethnic minorities, and is now, or may be in the future, responsible for the ongoing detention of ISIS terrorists in the region.

"Unfortunately, Turkey does not appear to be mitigating the humanitarian effects of its invasion," he said.

On pulling back of US troops, Trump said only a small contingent will remain at the Tanf Garrison in southern Syria to disrupt remnants of the ISIS.

During the 2016 presidential campaign, Trump had promised to bring back US troops from Syria and Afghanistan.

US forces have defeated the ISIS physical caliphate, the troops are coming out will now redeploy and remain in the region to monitor the situation and prevent a repeat of 2014, when the neglected threat of ISIS raged across Syria and Iraq, he said.

The troop withdrawal announcement came after the White House said it would step aside to allow for a Turkish operation President Erdogan has warned could come at any moment.

"The US and our partners have liberated 100 percent of ISIS’s ruthless territorial caliphate. Turkey must not put these gains in jeopardy," Trump said.

Turkey must also prioritise the protection of civilians, particularly vulnerable ethnic and religious minorities in northeast Syria, he said.

In addition, the return of refugees must be conducted in a safe, voluntary, and dignified manner, the US president said.

The Kurdish administration in northern Syria has announced a deal with the Damascus government on Syrian troop deployment near the border to fend of the Turkish offensive.

The UN Security Council has appealed to Turkey to "protect civilians" and exercise "maximum restraint" in its military operations in Syria.

On the decision to withdraw troops, Trump had faced a barrage of criticism from within his own Republican Party, including Senate Majority Leader Mitch McConnell and Senator Lindsey Graham.

Calling the move "a major blunder", Graham, usually a staunch defender of Trump's foreign policy, had said it was "an impulsive decision that has long-term ramifications" and "cuts against sound military and geopolitical advice".

Utah Senator Mitt Romney, who is one of the few Republicans to criticise the president on other issues, also tweeted that the pullback wa a "betrayal" that "says America is an unreliable ally." The move, he said, "facilitates ISIS resurgence" and "presages another humanitarian disaster".

McConnell warned that "a precipitous withdrawal" would benefit Russia, Iran and Syrian President Bashar al-Assad, and increase the risk that the Islamic State would "regroup".

Trump noted that since his first day in office, the administration has worked tirelessly to preserve the safety and security of the US and its citizens.

Isolated By All Countries In FATF, Pakistan On Verge Of Being On 'Dark Grey' List