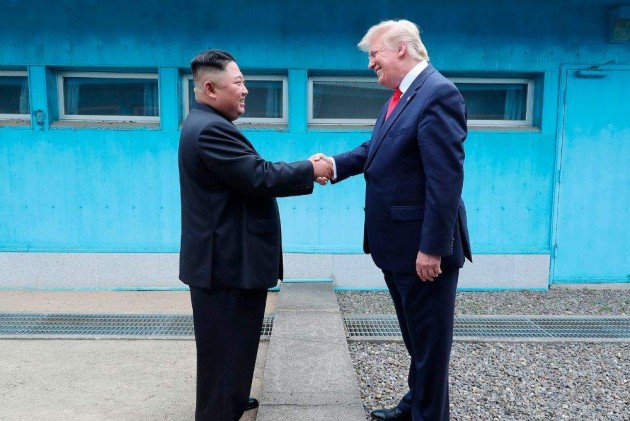 During their third summit at the Korean Demilitarized Zone on Sunday, Trump and Kim agreed to resume nuclear talks. But neither side has indicated they are any closer to resolving sticking points that collapsed their previous summit.

On Monday, however, South Korean President Moon Jae-in told a Cabinet meeting that the summit in the DMZ meant the two countries declared "an end of hostile relations" and the "start of an era of peace." Moon, who briefly chatted with Trump and Kim on a DMZ village before they sat for a two-way meeting, described the Trump-Kim summit as "historic."

He also called the summit "the fruits of amazing indignation," saying it was arranged due to Trump's "unprecedented" Twitter offer for a meeting and Kim's "bold" decision to accept it.

Moon, a liberal who took office in 2017, has lobbied hard to set up diplomacy between Trump and Kim to help find a peaceful settlement of the North Korean nuclear crisis. He met Kim three times last year, and their first and second summits happened at the same DMZ village called Panmunjom.

During their meeting, Trump went across Panmunjom's military demarcation line into North Korea, becoming the first sitting American president to step foot in the North's soil since the end of the 1950-53 Korean War. Trump said he was "proud" to step over the borderline, and thanked Kim for showing up for the meeting.

North Korea's state media described Kim's meeting with Trump as "an amazing event", and that both leaders expressed great satisfaction over the result of their talks. Moon's government has also said it hopes the diplomatic momentum created by the latest Trump-Kim meeting would help revive inter-Korean dialogue and engagement that stopped amid an impasse in nuclear negotiations between Washington and Pyongyang.

The latest Trump-Kim summit may have created a momentum for further diplomacy, including working-level talks aimed at hammering out the terms of a mutually acceptable deal, but many experts say it remains unclear whether the negotiations would successfully address the fundamental differences between Washington and Pyongyang that were exposed in the second Kim-Trump summit in Vietnam in February.

The Hanoi summit ended without any agreement after Trump turned down Kim's request for major sanctions relief in return for dismantling his main nuclear materials-making complex while leaving his already manufactured nuclear bombs and long-range missiles intact.