K-9 chased al-Baghdadi through a tunnel at his compound, following which the terrorist killed himself by detonating a suicide vest. 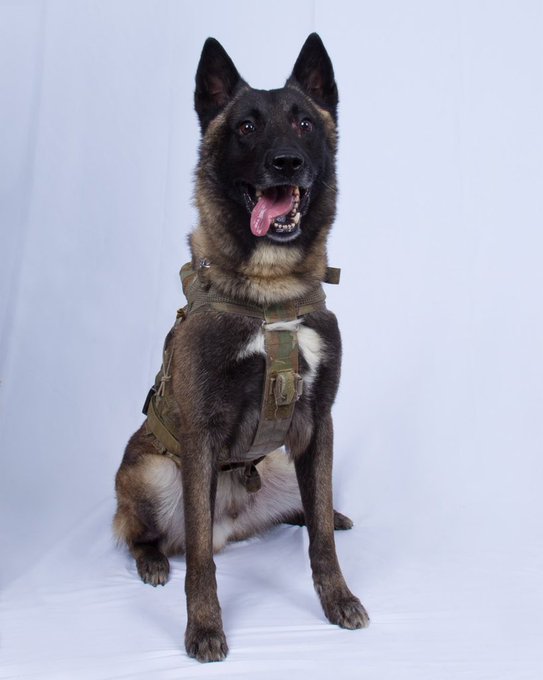 US President Donald Trump on Monday shared a picture of the "wonderful" US military dog that was wounded during the daring operation on Islamic State (ISIS) chief Abu Bakr al-Baghdadi in Syria.

However, the name of the dog was not revealed.

"We have declassified a picture of the wonderful dog (name not declassified) that did such a GREAT JOB in capturing and killing the Leader of ISIS, Abu Bakr al-Baghdadi!" Trump tweeted.

Earlier, a Washington Post journalist Dan Lamothe confirmed from a source that the wounded dog is doing fine and said that the name of the canine is not 'Classified' but is classified.

"US official confirms that the working dog wounded in the Baghdadi raid is ok. I said, what's the dog's name? Source said, it's classified. I said, really? Source said, yes," he tweeted.

Pentagon officials said on Monday that the dog is "fully recovering".

The K-9, which officials declined to identify, accompanied the US special forces during the raid and played an instrumental role in locating and tracking al-Baghdadi at his compound in Syria's Idlib province.

During the operation, the ISIS leader was ultimately killed, along with his wife and three children, The Washington Times reported.

K-9 chased al-Baghdadi through a tunnel at his compound, following which the terrorist killed himself by detonating a suicide vest. The nature of the dog's injury was not revealed, but officials underlined that the canine played a key role in the success of the secret mission.

On Sunday, Trump while confirming al-Baghdadi's death, said that the ISIS chief had "died like a dog" and "died like a coward" in the operation conducted by US forces in Syria.

He also spoke about the canine, saying a "beautiful dog" was injured during the operation, according to The Washington Post.

Al-Baghdadi, the most notorious ISIS leader, had been in hiding for the last five years. The US had earlier announced a reward of USD 25 million for information leading to the terrorist's death or arrest.