Israeli Prime Minister Benjamin Netanyahu described the accord as a "pivot of history", heralding a new dawn. 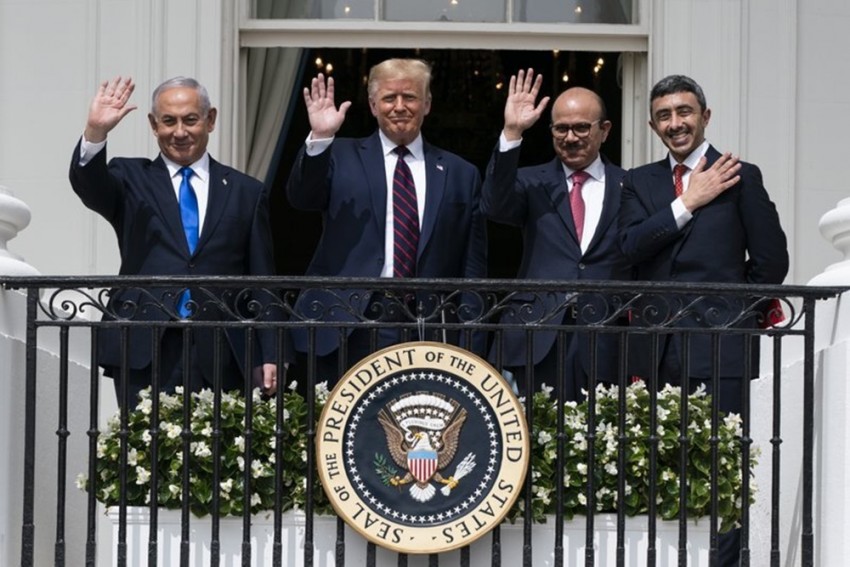 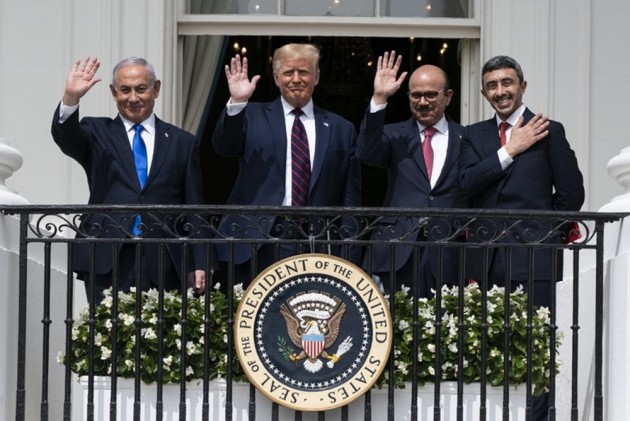 US President Donald Trump on Tuesday hosted Israeli Prime Minister Benjamin Netanyahu and foreign ministers of the United Arab Emirates and Bahrain for the signing of the historic Abraham Accord, which is the first Arab-Israeli peace deal in 26 years.

Meanwhlie, the Israeli military struck Hamas militant sites in the Gaza Strip early Wednesday in response to rocket fire toward Israel the previous night that coincided with the signing of normalization agreements between Israel and two Arab countries at the White House.

"We are here this afternoon to change the course of history. After decades of division and conflict we mark the dawn of a new Middle East," Trump said, moments before the accord was signed at the South Lawns of the White House.

"Thanks to the great courage of the leaders of these three countries we take a major stride towards a future in which people of all faiths and backgrounds live together in peace and prosperity," Trump said.

The president pointed out that these were the only two peace deals between Israel and the Arab States in more than a quarter of a century. Egypt was the first Arab State to sign a peace deal with Israel in 1979. Jordon signed a peace pact in 1994.

"Now we have achieved two in a single month and there are more to follow," Trump said.

As per the agreements, the UAE and Bahrain will establish embassies, exchange ambassadors, cooperate and work together with Israel across a range of sectors, including tourism, trade, healthcare and security.

"They are friends. The Abraham Accords also open the door for Muslims around the world to visit the historic sites in Israel and to peacefully pray at Al-Aqsa Mosque in Jerusalem, the third holiest site in Islam," Trump said, amidst applause and cheer from more than 200 invited guests.

Together these agreements will serve as the foundation for comprehensive peace across the entire region, Trump said.

Netanyahu described the accord as a "pivot of history", heralding a new dawn. "For thousands of years the Jewish people have prayed for peace. For decades, the Jewish state has prayed for peace and this is why today we are filled with such profound gratitude," he said.

"You have heard from the president that he has already lined up more and more countries. This was unimaginable a few years ago. But with resolve, determination, a fresh look at the way peace is done, this is being achieved," Netanyahu said.

Netanyahu said Israel is eager to invest in a future of prosperity, and peace.

"We've already begun to cooperate on combating coronavirus and I am sure that together we can find solutions to many of the problems that afflict our region and beyond," he said.

Foreign Minister Zayed said the UAE is witnessing a change in the Middle-East, one that gives hope around the world.

"We are witnessing today a new trend that will create a better path for the Middle-East," he said.

"This peace accord which is a historic achievement for the United States of America, the state of Israel and the United Arab Emirates will continue to have a positive impact as we believe that its reverberations will be reflected on the entire region, every option other than peace would signify destruction, poverty, and human suffering," he said.

“This new vision which is beginning to take shape as we meet today for the future of the region for love, youthful energy is not a slogan that we raise for political gain. Everyone looks forward to creating a more stable prosperous and secure future," the minister said.

Foreign Minister Zayani said peace between the Kingdom of Bahrain and the State of Israel is a step on the road to genuine and lasting security and prosperity.

“For too long the Middle East has been set back by conflict and mistrust causing uncontrolled destruction and thwarting the potential of generations of our best and brightest young people. Now I am convinced we have the opportunity to change that,” said the minister from Bahrain.

Soon after the signing, the White House, in a statement, said the deal will strengthen peace in the region, giving Muslims increased access to the Al Aqsa Mosque.

This will counter the extremists who use the false narrative that the Al Aqsa Mosque is under attack and that Muslims cannot pray at this holy site, it said.

The deal between the UAE and Israel represented a significant breakthrough in diplomatic relations between the two nations as the Trump administration works to facilitate cooperation between Arab nations and Israel.

Trump, seeking re-election in the November 3 presidential election against his Democratic Party rival, Joe Biden, is hoping that the two major diplomatic deals would help him in the polls.