Trump Seeking Second Term 'To Help Himself' And His 'Wealthy Friends': Obama

Obama at a drive-in car rally in Florida, urged Americans not to give a second term to Trump as he has no empathy and concern for average Americans 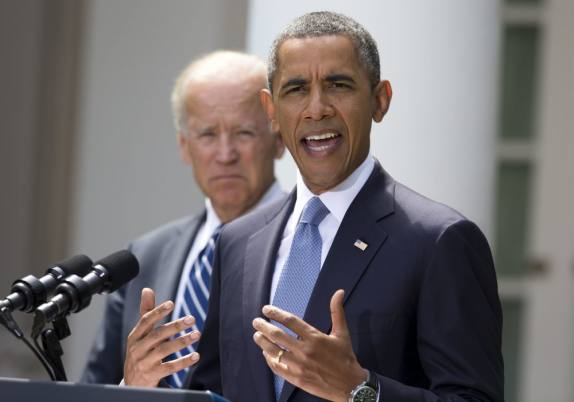 US President Donald Trump is seeking a second term to help himself and his wealthy friends, Barack Obama has alleged, as he tore into his successor for not having a plan to combat the COVID-19 pandemic and walking out of an interview.

Seeking support for former vice president Joe Biden, who is the presidential candidate of the Democratic Party, and his running mate Senator Kamala Harris, Obama at a drive-in car rally in the battle ground State of Florida on Saturday urged Americans not to give a second term to Trump.

Claiming that Trump has no empathy and no concern for average Americans, Obama, said the US president was seeking a second term only "to help himself" and his wealthy friends.

On the other hand, Biden and Harris are going to be in the fight, not for themselves, "but for you and us", he said.

"We have got a POTUS who actually suggested selling Puerto Rico. Believe it or not, it could've been worse. He once asked our national security officials if he could nuke hurricanes. I mean, at least he didn't do that. A nuclear hurricane seems like it would have been bad," Obama said.

"I've sat in the Oval Office with both of the men who are running for president and they are very different people. You know, Donald Trump, I knew he wasn't going to embrace my vision, I knew he wasn't going to continue my policies, but I did hope that for the country's sake he would have shown at least a little bit of interest in taking the job seriously. That's not how it worked out," he said.

Obama criticised Trump for walking out of his interview with reporter Lesley Stahl of CBS News.

"He got mad and walked out of the 60 Minutes interview. He thought the questions were too tough. If he can't answer a tough question like 'what would you like to do in your second term,' then we can't give him a second term. When 60 Minutes and Lesley Stahl are too tough for you, you ain't all that tough," he said.

"He was asked 'What is your new plan for the next phase of COVID?' Which is a pretty good question considering we just saw the highest number of cases spike up yesterday. So you'd think he'd be ready for a response. Instead, he just said it wasn't his fault and he didn't have (a plan). He doesn't have a plan, he doesn't even acknowledge the reality," Obama claimed.

Trump complained about being asked “tough questions”. The president cried foul about the interview on Tuesday, before releasing it on Facebook on Thursday.

Responding to Obama, Trump, in a tweet, later said that no one is showing up for the former US president.

"Nobody is showing up for Obama’s hate laced speeches. 47 people! No energy, but still better than Joe!” he said.

Obama claimed that his administration left the White House a pandemic playbook that showed them how to respond before a virus reached the US shores.

"It must be lost along with the Republican healthcare plan. We can’t find it. Eight months into this pandemic, new cases are breaking records. Donald Trump isn’t suddenly going to protect all of us. He can’t even take the basic steps to protect himself,” he said.

"Florida man wouldn’t even do this stuff. Why are we accepting it from the president of the United States? It’s not normal behaviour,” he said.

Obama said that Biden was not a socialist.

"Look, some of the rhetoric you’re hearing down here in South Florida, it’s just made up. It’s just nonsense. Listening to the Republicans, you’d think Joe was more communist than the Castros. Don’t fall for that garbage," he said.

'Don’t fall for that okie doke. Joe Biden isn’t a socialist. He was a senator from Delaware… I think folks would know if he was a super socialist right now. What’s true is he’ll stand up for regular people," said the former president.