Trump Threatens To Continue With US Govt Shutdown For Years

Around 800,000 federal workers have been without pay since December 22. 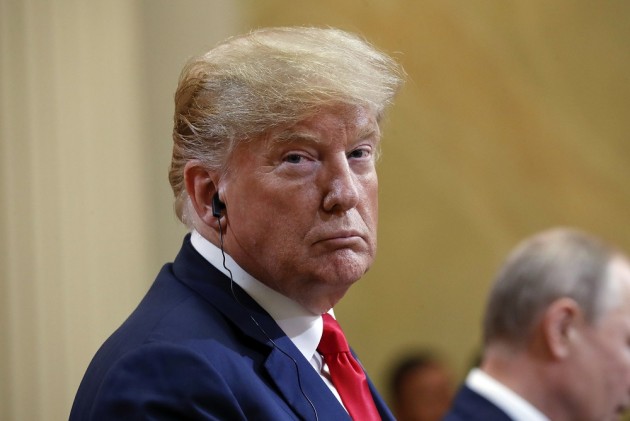 US President Donald Trump on Friday "threatened" to continue with the ongoing, two-week-old partial government shutdown for years if the Congress refused to support funding for a wall along the Mexico border.

Following a meeting with the Congressional leaders at the White House, ending in a stalemate, Trump said he may call a national emergency to build a border wall which, he argues, is essential to stop the illegal immigrants from entering the United States.

“I did say that. Absolutely, I said that,” Trump told reporters in the Rose Garden of the White House after Democratic leaders told media about the president's "threat", during their meeting with him, to continue with the partial government shutdown for years.

US Govt Shutdown Extended As Legislators Fail To Make A Breakthrough

“We told the president we need the government open. He resisted. In fact, he said he'd keep the government closed for a very long period, months or even years,” Senate Minority Leader Chuck Schumer told reporters after his meeting with Trump at the White House on ending the partial government shutdown.

“The discussion then - we discussed a bunch of issues - that were somewhat contentious, and we'll continue discussing, of course, but it's very hard to see how progress will be made unless they open up the government,” Schumer said.

House Speaker Nancy Pelosi, who attended the meeting along with other Congressional leaders stressed on the need to open the government.

“We recognise on the Democratic side that we really cannot resolve this until we open up the government and we made that very clear to the president. Services are being withheld from the American people.

"Paychecks are being held -- withheld from people who serve the needs of the American people and our border security will suffer if we do not resolve this issue,” Pelosi said.

Responding to reporters’ questions thereafter, Trump conceded he "threatened" to continue with the government shutdown but, he said, it is unlikely to happen.

“I don't think it will, but I am prepared and I think I could speak for Republicans in the House and Republicans in the Senate. They feel very strongly about having a safe country, having a border that makes sense. Without borders, I've said it many times, we don't have a country. I hope it doesn't go on even beyond a few more days. It really could open very quickly,” he said.

Trump said he also has the option of building the border wall with his constitutional provisions under national emergency.

“We could call a national emergency because of the security of our country. Absolutely. No, we could do it. I haven't done it. I may do it. I may do it. But we could call a national emergency and build it very quickly and it's another way of doing it. But if we can do it through a negotiated process, we're giving that a shot,” Trump told reporters in response to a question.

The president, however, denied he threatened the Democrats.

“I'd never threatened anybody, but I am allowed to do that, yes,” he said.

Trump, during the meeting with the Congressional leaders, made another strong case for a border wall.

“I explained to them the problem though as we could have a wonderful port of entry but you have 2000 miles of border between the United States and Mexico and if you take a look and you see like we do through certain technology including cameras in airplanes, not just drones, you will see vast numbers of vehicles driving through the desert and entering where you don't have a very powerful fence or a wall,” he said.

Trump said he only wants to stop the flow of illegal immigrants, human trafficking and smuggling of drugs, by having a solid steel structure or concrete structure.

“Now the steel is actually more expensive than the concrete but I think we are probably talking about steel because I really feel the other side feels better about it and I can understand what they are saying. It is more expensive,” he said.

“We're not playing games. We have to do it. And just remember human traffickers, remember drugs, the drugs are pouring into this country. They don't go through the ports of entry. When they do, they sometimes get caught," said Trump.

He said even Democrats want to check the inflow of drugs and illegal immigrants in the country.

"When we finish, and the Democrats do want this, they want ports of entry strengthened and I want to do that too. In fact, we have it done. It's about USD 400 million and we can have the best equipment in the world,” he said.

Vice President Mike Pence said the nation is in the midst of a crisis on the southern border.

“And today President Trump convened (this meeting) for the second time this week (for the) the Republican and Democrat leaders from the Congress to address both issues. And we are truly grateful for the candid and constructive dialogue that took place today here at the White House with Speaker Pelosi and leader Schumer, with our Republican Senate leadership as well, and we look forward to continued dialogue over the course of this weekend,” he said.