A thick column of white smoke was seen rising from the headquarters of Ismalist Party in Tunisia, as occupants tried to jump out of the windows to escape the flames. 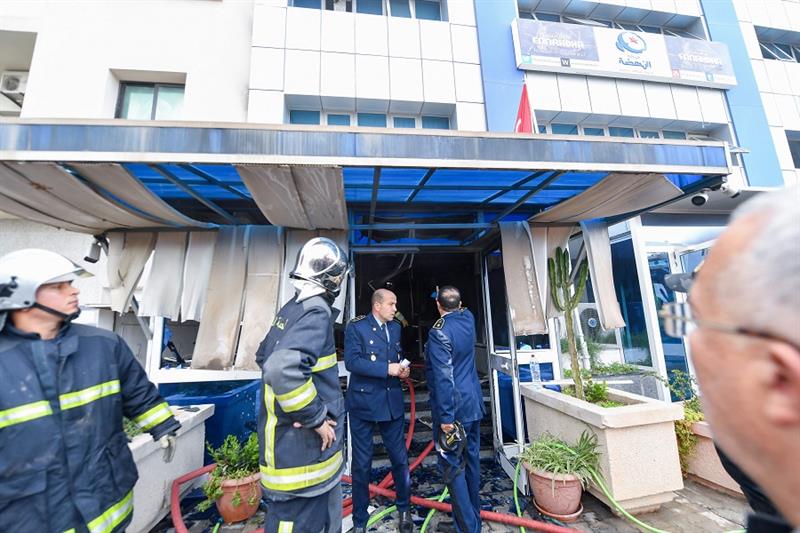 A fire at Tunisia's largest Islamist party's headquarters in the capital Tunis on Thursday killed one person and injured eighteen, authorities and the party said.

The injured included a former prime minister who was hurt after jumping out of a window.

In a statement, the Ennahdha movement said party activist Sami Sifi, 51, died and several staff members and politicians were injured.

The cause of the blaze was not immediately clear.

Tunisia's Interior Ministry said “a charred body” had been taken away by rescue teams and 18 people had been injured, most of whom were treated for respiratory problems.

Videos on social media showed a thick column of white smoke rising from the building, as occupants tried to jump out of the windows to escape the flames.

Ennahdha Vice-President Ali Laarayedh, who served as Tunisia's prime minister in 2013-2014, suffered leg fractures after jumping from a second floor window. His son wrote on social media that he was taken to hospital for treatment.

Ennahdha said the causes of the fire are “not yet known.”

“The Party prays for mercy for the deceased and expresses condolences to his family, it thanks the firefighters who intervened quickly to put out the fire and rescue those present at the headquarters” it said in a statement.

The Interior Ministry said a judicial inquiry had been opened.

Formerly Tunisia's ruling party with a majority of seats in parliament, Ennahdha has been in the grip of an internal crisis for months, sparked by Tunisian President Kais Saied's power grab this summer.

Although observers have warned of democratic backsliding, Saied's measures have proven widely popular with a Tunisian public weary of the country's political elites amid an economic and political crisis exacerbated by the Covid-19 pandemic. Many Tunisians blame Ennahdha for mishandling the country's successive crises.

But since July, hundreds of Ennahdha MPs have resigned or openly criticized the party and its leader Ghannouchi.