The typhoon was packing winds of 155 kilometres (95 miles) per hour and gusts up to 191 kph (120 mph) when it dumped rain on Taiwan, earlier 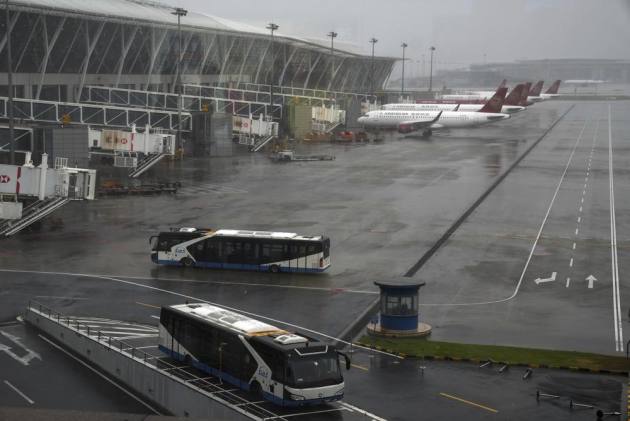 Typhoon In-fa hit China's east coast south of Shanghai on Sunday after airline flights and trains were cancelled and the public was ordered to stay indoors.

The typhoon made landfall in Zhoushan in Zhejiang province, state TV reported, citing the national weather agency. It forecast rainfall of 250-350 millimetres (10-14 inches).

“People should not willingly go outdoors,” the bureau said.

The typhoon was packing winds of 155 kilometres (95 miles) per hour and gusts up to 191 kph (120 mph) when it dumped rain on Taiwan. It knocked down tree branches but no deaths or injuries were reported.

Hundreds of flights at Shanghai Pudong and Shanghai Hongqiao airports were cancelled and more were expected to be cancelled on Monday, state TV reported. Shanghai closed parks and the riverfront Bund district, a popular tourist area.

Train service to Ningbo, a port city south of Shanghai, was suspended, according to state TV. The Zhoushan Bridge that connects islands near Ningbo was closed, as were schools, markets and businesses in Zhejiang province.

On Saturday, large container ships were moved from Yangshan Port in Shanghai, one of the world's busiest shipping centres. State TV said a ship lock in Nantong, which abuts Shanghai to the north, stopped releasing vessels into the Yangtze River.

Meanwhile, in central China, the death toll rose to 58 after record rains hit the major city of Zhengzhou on Tuesday, state TV reported. The rains flooded a Zhengzhou subway tunnel where at least 12 people died, knocked out power to a hospital and other buildings and left streets filled with mud.

Rescuers used bulldozers and rubber boats to evacuate residents of areas that still were underwater, according to the Shanghai news outlet The Paper.