Johnson laid out a five-level alert system that the government will be constantly monitoring based on scientific data to track the rate at which the deadly virus is spreading. 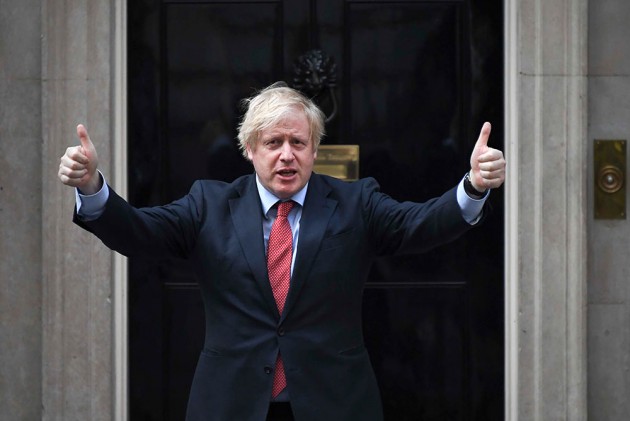 British Prime Minister Boris Johnson has launched a new COVID-19 Alert System and "modified" the UK's coronavirus lockdown as part of a "conditional plan" which allows people more time outdoors as long as social distancing measures are adhered to.

In a televised address to the nation, Johnson laid out a five-level alert system that the government will be constantly monitoring based on scientific data to track the rate at which the deadly virus is spreading – referred to as the “R” rate.

"Though we have made progress in satisfying at least some of the conditions I have given, we have by no means fulfilled all of them. And so no, this is not the time simply to end the lockdown this week.

"Instead we are taking the first careful steps to modify our measures," the prime minister said on Sunday.

In reference to the alert system, he said, "Level One means the disease is no longer present in the UK and Level Five is the most critical – the kind of situation we could have had if the NHS (National Health Service) had been overwhelmed.

"Over the period of the lockdown we have been in Level Four, and it is thanks to your sacrifice we are now in a position to begin to move in steps to Level Three."

However, all workers are asked to avoid the use of public transport as far as possible and use more environment-friendly options such as walking and cycling.

Clarifying the conditions in which businesses would reopen, Johnson said: "Throughout this period of the next two months we will be driven not by mere hope or economic necessity. We are going to be driven by the science, the data and public health. And I must stress again all of this is conditional, it all depends on a series of big ifs."

People in England will be allowed to sit in the parks within their household groups, to drive to beauty spots for walks and take unlimited amounts of outdoor exercise. People will be able to meet and sit down with a single other people outdoors as long as they stay two metres apart.

Angling, swimming in lakes or rivers, tennis and golf will all be allowed if people are sticking to their household groups.

The rules on outdoors will be different in Scotland, Northern Ireland and Wales, with Scottish First Minister Nicola Sturgeon saying Scots will be allowed unlimited exercise from Monday but not any sunbathing, picnics or barbecues – unlike the rules for England.

Johnson said phase two of the lockdown easing will begin “at the earliest by June 1”.

It will include the phased reopening of shops and to get primary pupils back into schools, in stages.

"And though the UK will be changed by this experience, I believe we can be stronger and better than ever before. More resilient, more innovative, more economically dynamic, but also more generous and more sharing. But for now we must stay alert, control the virus and save lives," he said.

Johnson is expected to give further details of the first phase of looking into easing strict social distancing rules during a statement to Parliament on the modification to the UK's COVID-19 lockdown, which began on March 23.

The Opposition has criticised the government's new "stay alert" message as vague.