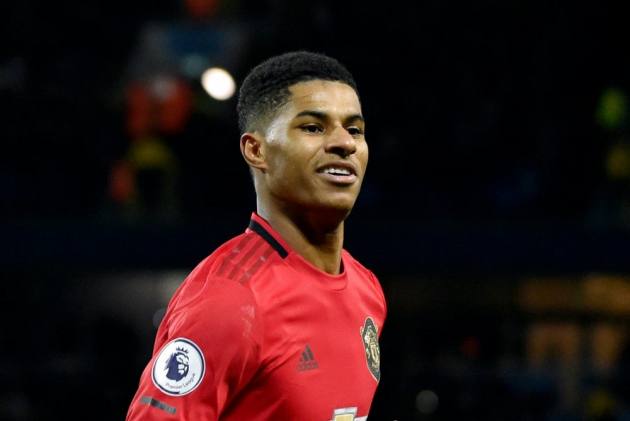 The British government has made another abrupt about-face and now says it will provide free meals to disadvantaged children in England over the upcoming holidays following a hugely popular child hunger campaign by soccer star Marcus Rashford.

British Prime Minister Boris Johnson phoned the 23-year-old Manchester United striker after his team's Premier League victory over Everton on Saturday to inform him of the government's decision to spend 170 million pounds ($220 million) in extra funding to support needy families over the coming year.

“Following the game today, I had a good conversation with the Prime Minister to better understand the proposed plan, and I very much welcome the steps that have been taken to combat child food poverty in the U.K.,” Rashford said.

His petition demanding the Conservative government pay for free school meals for disadvantaged students over the holidays attracted more than 1 million signatures.

The money will be handed to local authorities by December in time to support families over Christmas, many of whom are facing financial difficulties due to the coronavirus pandemic.

Rashford, who has eloquently spoken about his own childhood experiences of relying on free school lunches and food banks, said the steps taken will improve the lives of nearly 1.7 million children in the U.K. over the next 12 months, “and that can only be celebrated.”

Rashford said he was “so proud” of those who backed his campaign against child hunger and that he was “overwhelmed by the outpouring of empathy and understanding."

It's the second time this year that Rashford has forced the government to change its policies. In June, it agreed to keep funding meals for poor students over the summer holidays after initially resisting.

The new money will pay for the Covid Winter Grant Scheme to support families over Christmas while the Holiday Activities and Food program will be extended to cover the Easter, summer and Christmas breaks in 2021.

As part of the package, Healthy Start payments, which help expectant mothers and those on low incomes with young children buy fresh fruit and vegetables, are to rise from 3.10 pounds to 4.25 pounds ($3.61 to $4.94) a week beginning in April 2021.

“We want to make sure vulnerable people feel cared for throughout this difficult time and, above all, no one should go hungry or be unable to pay their bills this winter," said Work and Pensions Secretary Therese Coffey.

The new money comes a month after the Conservative government failed to back a motion from the opposition Labour Party to extend free school meals. Labour's education spokesperson, Kate Green, accused the government of “incompetence and intransigence” for waiting until after the October fall school break to make the announcement, and of creating “needless and avoidable hardship for families across the country.”

Businesses and local governments stepped into the breach following the government's failure to pay for free school meals in October.

England's children's commissioner, Anne Longfield, welcomed the government's announcement Sunday but called on it to “go further” with benefit payments.

"Hunger does not take a holiday when schools close and a long-term solution to the growing number of children in poverty is urgently required,” she said.

Anna Taylor, executive director of the Food Foundation thinktank, also welcomed the government's change of heart, saying it was a “big win” for disadvantaged children.

But she said the government needs to help another 1.7 million poor students who miss out on free school lunches because the qualifying income is set far too low.

“Children's food poverty, like the pandemic, will not go away until we have a lasting solution in place,” she said.