Japan is seeking to expand its military cooperation beyond its traditional alliance with the United States as China's navy expands and increasingly presses its territorial claims. 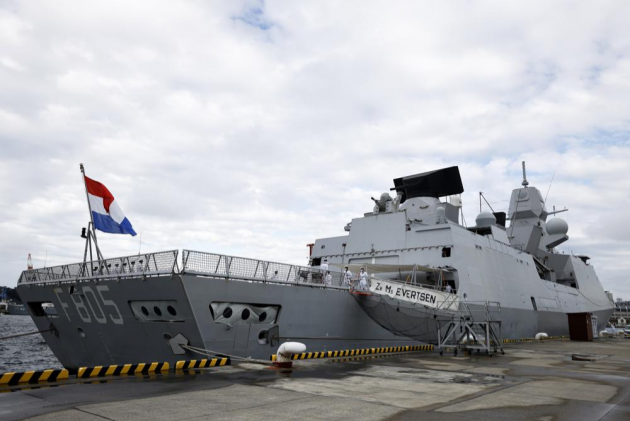 Japan's defence minister on Monday welcomed the British aircraft carrier HMS Queen Elizabeth as it made its first Japanese port call, saying the involvement of European nations in the Indo-Pacific region is key to peace and stability as China's military strength and influence grow.

The ship arrived at the US Navy base in Yokosuka near Tokyo on Saturday. Japan is seeking to expand its military cooperation beyond its traditional alliance with the United States as China's navy expands and increasingly presses its territorial claims.

The Queen Elizabeth participated in a joint exercise with warships from the United States, the Netherlands, Canada and Japan before arriving in Yokosuka. The exercise was part of efforts to achieve a "free and open Indo-Pacific" vision led by Washington and Tokyo.

"European countries' interest in (China's) unilateral attempts to change the status quo in the East and South China Seas ... contributes to the peace and stability in this region," Kishi told reporters. "I expect the port call will contribute to a further development of Japan-British defense cooperation."

Japan has become increasingly worried about China's growing military influence in the region as well as Beijing's escalating tensions with Taiwan and rivalry with the United States. Japan has repeatedly protested to China over its increased activity near the Japanese-controlled Senkaku Islands, which are also claimed by China, which calls them Diaoyu.

After arriving in Yokosuka, Moorhouse tweeted that the strike group's interaction is part of Britain's "commitment to strengthen our diplomatic, economic and security ties in the Indo-Pacific." He said it will take ties between Japan and Britain "to a whole new level."

"The Carrier Strike Group's presence embodies the United Kingdom's support for the freedom and security of the region's vital trading routes, and for an international system that benefits all countries," Moorhead said.

The strike group departed from Britain in May. Commissioned in 2017, the HMS Queen Elizabeth is Britain's largest and most powerful warship. It is capable of carrying up to 40 aircraft such as F-35 stealth fighters, according to the Royal Navy. (AP)