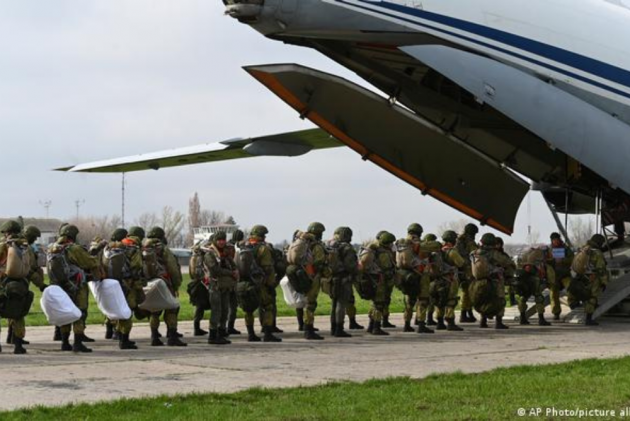 German Foreign Minister Annalena Baerbock spoke with her Russian counterpart Sergei Lavrov on Tuesday, telling him that the "territorial integrity of Ukraine must not be violated."

The Foreign Ministry announced on Twitter that the two top diplomats had spoken over the phone about the ongoing crisis on the border between Russia and Ukraine.

In recent weeks, Russia has fomented fears that it is preparing to invade its neighbor as it carries out a massive troop build-up near the border. However, Moscow has denied any plans to attack, instead accusing Kyiv of aggressive posturing.

The West has threatened Russia with the "strongest-ever sanctions," as US President Joe Biden put it, should it invade Ukraine.

Baerbock sought an "honest and open exchange" with Lavrov the Foreign Ministry wrote on Twitter, and urged Russia to return to the armistice between Ukrainian troops and Russia-backed rebels.

Lavrov's office said the foreign minister congratulated Baerbock on her appointment during the call, and emphasized that "Russia and Germany should work together in the interests of security and stability in Europe and in the world."

He pressed again for Russia's demand that NATO issue an assurance that Ukraine will never become a member, something the alliance has refused to do.

Baerbock spoke with Lavrov while she was in Stockholm attending a nuclear non-proliferation summit. At the summit, she took Moscow to task for vetoing a UN climate resolution and called on Moscow and Washington to end the current "standstill" on nuclear disarmament.

The phone call came on the same day as Ukrainian President Volodymyr Zelenskyy said in an interview with Italian media that Germany was "blocking the delivery of weapons systems" it was acquiring in cooperation with NATO.

Zelenskyy also accused Germany of insufficient support in his country's conflict with Russia.