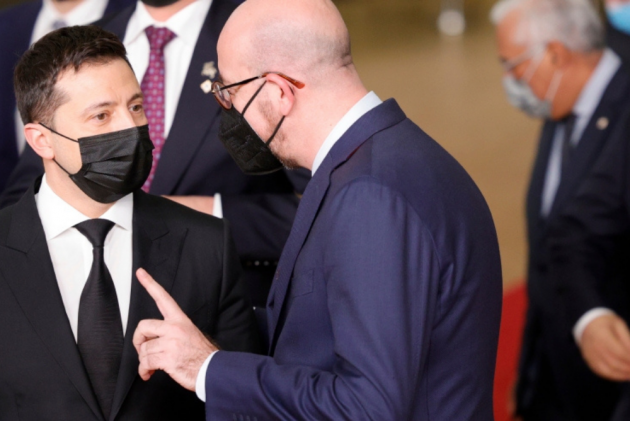 A summit of European Union leaders on Thursday will focus on avoiding a Russian military invasion into neighbouring Ukraine with threats of unprecedented sanctions for Moscow and the promise of diplomatic talks.

The Russian military buildup on Ukraine's border is taking centre stage at the summit of the EU's 27 leaders, with a plea from Ukraine's president to start imposing more sanctions before any possible incursion rather than after the border has been crossed.

“Maybe there are some open channels for some serious negotiations” over the coming days, said Prime Minister Janez Jansa of Slovenia, which holds the EU presidency, adding it could consist of talks between France, Germany, Ukraine and Russia.

But like all, he wearily watched the Ukraine-Russia border, where US intelligence officials say Russia has moved 70,000 troops and is preparing for a possible invasion early next year.

Moscow denies that it has any plans to attack Ukraine, but did so in 2014 when it annexed the Crimean Peninsula.

“It is not normal for regular military exercises," Jansa said, adding that there's no doubt that Russia is using its military might to put Ukraine under pressure.

No one feels it more than Ukrainian President Volodymyr Zelenskyy, who urged EU leaders late Wednesday to swiftly impose new sanctions on Russia before it invades his country, and warned that acting after any conflict would be far too late.

Zelenskyy said Ukraine stands ready to enter into talks with Russia to ease tensions, but that Russian President Vladimir Putin doesn't appear willing to come to the table at the moment.

France and Germany brokered a peace agreement in 2015 that helped end large-scale hostilities in eastern Ukraine, where Ukrainian forces have been fighting Russia-backed separatists since 2014. But the conflict, which has left 14,000 dead, has simmered.

EU leaders are widely expected to approve on Thursday a draft summit conclusion, seen by The Associated Press, that warns that “any further military aggression against Ukraine will have massive consequences and severe cost in response.”

Zelenskyy said the use of sanctions after military action had proved very limited for his country and that it might be be different “if the sanctions are applied prior to the armed conflict would they become a prevention mechanism.”

European officials argue that it's a better deterrent to keep Putin in the dark about what measures might be used against him.

Asked by reporters whether Europe would act on Zelenskyy's call, European Council President Charles Michel said: “We have sanctions in place, we are ready to take additional sanctions if needed, and we will see” what happens.

The US and the EU have been coordinating their response to the Russians, but no real details of any sanctions have emerged.

EU nations are divided between those in the east that think sanctions should be imposed immediately, and others like France and Germany who fear that could provoke an invasion. (AP)