Ukraine: Tens of thousands of Russian soldiers have been deployed along its border. President Vladimir Putin and his US counterpart Joe Biden will address the growing tensions — and other issues — in a video call Tuesday. 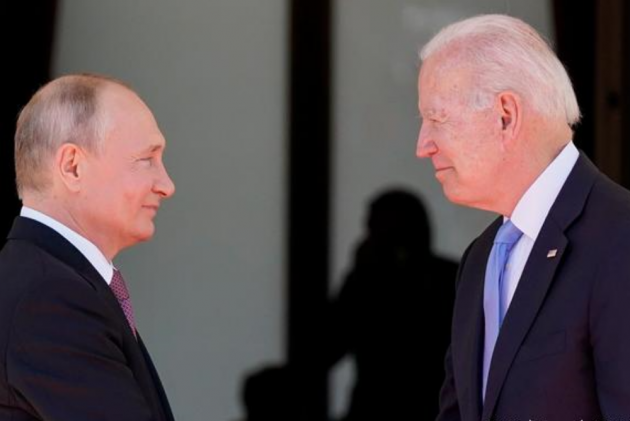 Russian President Vladimir Putin and his US counterpart Joe Biden are expected to discuss the growing tensions in Ukraine, in a video call on Tuesday. The West is concerned over Russian troops massing along the Ukrainian border and cautions that tensions could spill into a major war.

Video calls have become the new normal since the coronavirus pandemic began. Yet for the Russian and US leaders, they remain a rarity. For weeks, top Russian officials have been drawing attention to the media about planned exchange and talking up the event in various reports and statements.

And, indeed, expectations are high — although a personal meeting between Putin and Biden is not planned until early 2022.

The talks between the two leaders has long been penciled in. Both presidents had originally agreed in Geneva to reevaluate agreements reached concerning issues of strategic stability and cybersecurity. But these are likely to be eclipsed in Tuesday's call by the armed conflict in Ukraine.

Back in spring, just like now, President Putin had amassed troops on Ukraine's border ahead of talks with Biden.

Former US diplomat Rose Gottemoeller, a leading disarmament and Russia expert, tells DW, "It's a very concerning situation and very dangerous, because no matter what Putin intends the possibility of accident or incident leading to a hot crisis is very real."

Gottemoeller, who served as deputy secretary general of NATO and now lectures at Standford University, nevertheless says, "Biden, in many ways, has the upper hand here. Putin very much wants this meeting with Biden."

He says that while there is an increase in "willingness to engage in dialogue," there is still "no guarantee a favorable outcome will result from talks between Putin and Biden."

What, then, does Putin want? Russia is pursuing a "containment strategy with regard to the West and Ukraine," says Kortunov. Troop concentrations along Ukraine's border are intended to deter Kyiv from using military force to retake separatist-controlled regions, he adds. Kyiv has previously denied such intentions.

According to Kortunov, Putin regards Western military support for Ukraine — such as arms deliveries and joint drills as crossing a red line. "But it's not entirely clear where exactly that line is," he adds.

Surprisingly, Putin in November raised a new topic he wants to discuss with Biden: Negotiating "long-term security guarantees" with the West.

A few days ago, he clarified exactly what this means. Putin wishes to see "legal guarantees" against further NATO expansion eastward. The message was clearly directed at Ukraine and Georgia, which are both striving to join the Western military alliance and had been promised in 2008 that they would one day join — albeit without a concrete timetable.

President Biden, however, has made clear he does not accept ultimatums from anyone.

Rose Gottemoeller tells DW: "For the United States and for the NATO alliance, Ukraine is an independent and sovereign country," adding that it's this very sovereignty that the US and NATO are going to support.

She believes that Putin is "replaying history" and attempting to undo the dissolution of the Soviet Union.

"I do believe that he is trying to rewind the tape — and I hope that it doesn't lead to violence."

US-Russian ties appeared to be thawing until Ukraine began dominating Russia's foreign policy agenda. In early November, Russian Ambassador Anatoly Antonov in Washington welcomed a range of "positive" developments, such as the agreement to extend the New START (Strategic Arms Reduction) Treaty and the Geneva summit.

With regards to checks on nuclear weapons — broadly referred to as strategic stability — only institutional progress has been made, says Gottemoeller. "One (working group) is specifically dedicated to laying the foundation to new negotiations to replace the new START Treaty, so that's an important step.

In the other working group, says Gottemoeller, "The Russians agreed with the Americans that new technologies will be discussed and their possibly destabilizing impact on the strategic stability balance." This refers to modern weapons, such as hypersonic missiles, some of which are already used by Russia.

Gottemoeller stresses that Biden prioritizes cybersecurity. "It's one of the key issues that he wanted to take a check on after six months, following the Geneva summit."

Little progress has, however, been achieved in this area. Still, a working group and UN initiative have been set up.

Kortunov, meanwhile, says Russia will neither admit to its involvement in previous cyber attacks nor accept responsibility for future attacks. In the past, he says, Washington blamed Russia for such incidents but the Kremlin has always denied any wrongdoing. In addition, Moscow will not make any unilateral commitments because Russia has also accused Washington of carrying out cyber attacks.

One thing is unusual, however. Biden will talk with Putin first and then — two days later — engage with various heads of state and government he invited for his Democracy Summit, which will focus, among other things, on "defending against authoritarianism."

Back in June, President Biden first conferred with his allies at the G7 and NATO summits before meeting with Putin.

Gottemoeller remains skeptical of, as many describe it, a "moderate thaw" in US-Russia relations.

Instead, she says, ties remain unpredictable — even though both sides are trying to make progress and reach a balance to avoid direct confrontation.