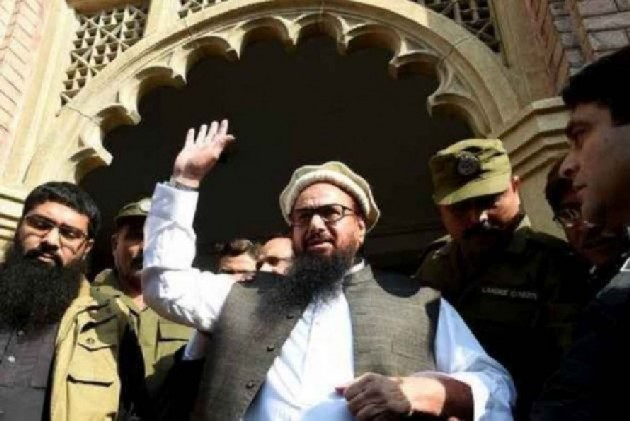 Mumbai attack mastermind and banned JuD chief Hafiz Saeed has been allowed by an anti-terror committee of the UN Security Council to withdraw money from his bank account for basic expenses on Pakistan's request.

Saeed-led Jamaat-ud-Dawah (JuD) is the front organisation for the Lashkar-e-Taiba which is responsible for carrying out the 2008 Mumbai attacks that killed 166 people.

He was listed under UN Security Council Resolution 1267 in December 2008. According to UN provisions, all states are required to freeze the funds and other financial assets or economic resources of designated individuals.

The resolution also provides for states to sanction basic expenses of the designated individuals if there is no-objection over it.

The 1267 Committee, which deals with terror groups like the Islamic State, the al-Qaeda and associated individuals and organisations, said that it approved Pakistan's request after no objections were placed before it by the set deadline of August 15, 2019.

"The Chair has the honour to refer to his draft letter to the Islamic Republic of Pakistan communicating the Committee's decision with respect to the intention of the Pakistani authorities to authorise certain expenditures to the benefit of Hafiz Mohammad Saeed, Haji Muhammad Ashraf and Zafar Iqbal, to cover basic expenses as specified in the note verbale of the Islamic Republic of Pakistan pursuant to paragraph 81 (a) of resolution 2368 (2017)," said a note issued by the committee.

"The Chair wishes to inform the members that no objections were placed by the set deadline of 15 August 2019 for the consideration of the draft letter. Consequently, the letter is approved and the Chair will instruct the Secretariat to dispatch it," the note added.

In Islamabad, Pakistan's Foreign Office on Thursday said the household expenditure exemption by the UNSC to Saeed was in line with the procedure of the world body.

“Such an exemption was in line with the established procedures and practices of the UNSC 1267 Sanctions Committee,” the Foreign Office said.

It said that Saeed and others had submitted an exemption request for basic expenditure to the UNSC. The request was later approved by the Council as a matter of routine, it said.

The Foreign Office said that "a certain section of Indian media was unnecessarily politicising this issue to cast negative aspersions on Pakistan's efforts to implement its obligations under the UN sanctions regimes."

Saeed, a UN-designated terrorist whom the US has placed a USD 10 million bounty on, was arrested on July 17 this year in a terror-financing case in Pakistan. He is lodged at the Lahore's Kot Lakhpat jail in high security.