The Security Council on Monday adopted the resolution sponsored by France, UK and the US with 13 members voting in favour, none against and permanent, veto-wielding members Russia and China abstaining. 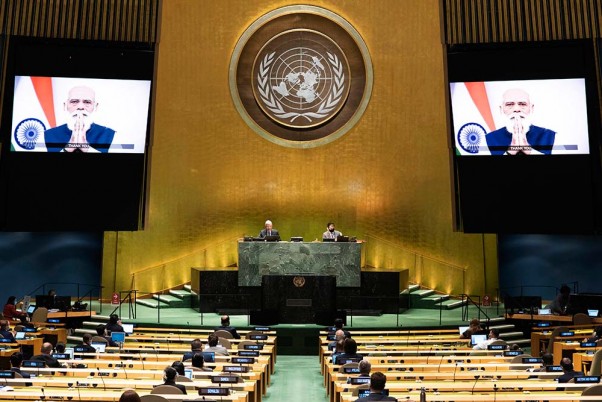 The UN Security Council, under India's Presidency, adopted a strong resolution demanding that territory of Afghanistan not be used to threaten any country or shelter terrorists and that it expects the Taliban will adhere to commitments made by it on regarding the safe and orderly departure from the country of Afghans and all foreign nationals.

The Security Council on Monday adopted the resolution sponsored by France, UK and the US with 13 members voting in favour, none against and permanent, veto-wielding members Russia and China abstaining.

This was the first resolution adopted by the powerful 15-nation Council on the situation in Afghanistan following the takeover of Kabul by the Taliban and came on the penultimate day of India's Presidency of the Security Council for the month of August.

Reaffirming its strong commitment to the sovereignty, independence, territorial integrity, and national unity of Afghanistan, the resolution "condemns in the strongest terms the deplorable attacks" of August 26 near the Hamid Karzai International Airport in Kabul for which the Islamic State in Khorasan Province, an entity affiliated with the Islamic State in Iraq and the Levant (Da’esh) claimed responsibility and which resulted in deaths and injuries of over 300 civilians and 28 military personnel.

The UNSC resolution took note of the Taliban’s condemnation of the attack.

The resolution “demands that Afghan territory not be used to threaten or attack any country or to shelter or train terrorists, or to plan or to finance terrorist acts, and reiterates the importance of combating terrorism in Afghanistan, including those individuals and entities designated pursuant to resolution 1267 (1999), and notes the Taliban’s relevant commitments.”

The resolution notes “the Taliban statement of August 27, 2021, in which the Taliban committed that Afghans will be able to travel abroad, may leave Afghanistan anytime they want to, and may exit Afghanistan via any border crossing, both air and ground, including at the reopened and secured Kabul airport, with no one preventing them from travelling, expects that the Taliban will adhere to these and all other commitments, including regarding the safe, secure, and orderly departure from Afghanistan of Afghans and all foreign nationals.”

The Council, through the resolution, also took note of the "dangerous security situation" around the Hamid Karzai International Airport in Kabul and "expresses concern that intelligence indicates further terrorist attacks may take place in the area, calls on the relevant parties to work with international partners to take steps to strengthen security and to prevent further casualties, and requests that every effort be made to allow for the rapid and secure reopening of the Kabul airport and its surrounding area."

US Ambassador to the UN Linda Thomas-Greenfield in her explanation of the vote said through the resolution “we have spoken once again on the urgent need to tackle the serious threat of terrorism in Afghanistan. Last week’s horrific attack in Kabul demonstrated the very real threat that terrorist groups like ISIS-K pose."

President Joe Biden has made clear that America will do what’s necessary to defend our security and our people. And the entire international community is committed to ensuring that Afghanistan is never again a safe haven for terrorism," she said.

She said the resolution establishes clear expectations regarding the future of Afghanistan - that the Security Council expects the Taliban to live up to its commitment to facilitate safe passage for Afghans and foreign nationals who want to leave Afghanistan, “whether it’s today, tomorrow, or after August 31’.

"We took into account some of the concerns that both the Chinese and the Russians raised in the draft resolution that was eventually approved. So, the fact that they abstained, I think they will have to explain themselves. But I think the Security Council spoke strongly, and what’s in the resolution, I think, are issues that are important to every single member of the Security Council including China and Russia,” she said.

Russia’s Permanent Representative Vassily Nebenzia said Moscow “was forced to" abstain during the vote on the resolution on Afghanistan “because the authors of the draft ignored our principled concerns.”

He said despite the fact that the resolution was proposed against the backdrop of a terrible terrorist attack, the authors categorically refused to refer to a passage on the fight against terrorism “containing internationally recognised terrorist organisations ISIL and the East Turkistan Islamic Movement.

“We see this as a reluctance to acknowledge the obvious and a desire to divide terrorists into “ours” and “theirs” and... to downplay the terror threats coming from these groups.”

“We understand the reasons that incited the authors to try to use the authority of the Security Council to adopt the resolution in this form and in such a tight timeframe but perhaps if we had more time, the result of the vote would have been different.”

“China has huge doubts about the necessity and urgency of adopting this resolution and the balance of its content. Despite this, China has still participated constructively in the consultations and put forward important and reasonable amendments together with Russia. Unfortunately, our amendments have not been fully adopted.," Geng said.

China has always opposed imposing or forcefully pushing for resolution by any sponsors. Based on the above considerations China has abstained from this draft resolution," Geng added.

He said “in the face of the fundamental changes in the domestic situation in Afghanistan, it is necessary for the international community to engage with the Taliban, and actively provide them with guidance.”

In Beijing, Chinese Foreign Ministry Spokesperson Wang Wenbin said, "China has huge doubts about the necessity and urgency of adopting this resolution and the balance of its content."

Despite this, Wang said China has still participated constructively in the consultations and put forward important and reasonable amendments together with Russia.

UK’s envoy to the UN Ambassador Barbara Woodward said the resolution is an important step towards a unified international response to the situation in Afghanistan.

“We will continue to build on this to ensure the Council holds the Taliban accountable on its commitments. The Taliban will be judged by the international community on the basis of their actions on the ground, not their words.”

The strong resolution reaffirms the importance of upholding human rights including those of women, children and minorities, encourages all parties to seek an inclusive, negotiated political settlement, with the full, equal and meaningful participation of women, that responds to the desire of Afghans to sustain and build on Afghanistan’s gains over the last twenty years.