About one-fifth of the President's claims are about immigration issues, a percentage that has grown since the December 2018 government shutdown, over funding for his promised border wall. 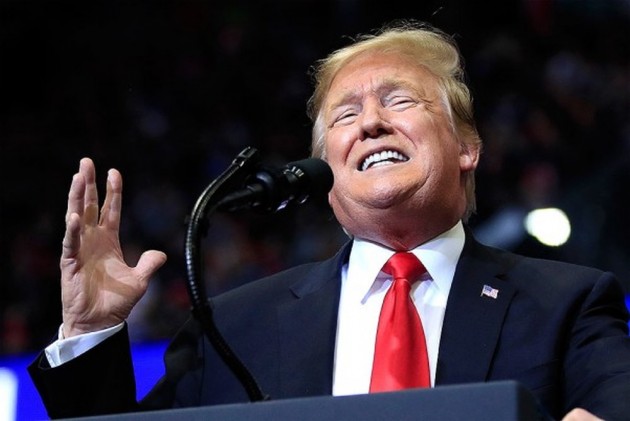 US President Donald Trump has till now made over 10,000 false or misleading claims, with an average of nearly 23 a day, about the midterm elections, the partial government shutdown over his promised border wall, and the release of the Special Counsel’s report on Russian interference, The Washington Post said.

The Post stated that the president passed the 10,000-untruth mark on Friday, a day before he appeared before a crowd in Green Bay, Wisconsin, to make the claim that pro-abortion Democrats support the execution of babies, who have already been born, reported The Japan Times.

“The baby is born,” he told his fans.

“The mother meets with the doctor. They wrap the baby beautifully. And then the doctor and the mother determine whether or not they will execute the baby," he said.

The daily's Fact Checker's database analyses, categorizes and tracks every suspected statement uttered by the President, it said in the report on Monday.

This milestone appeared unlikely when the Fact Checker first started this project during his first 100 days in office.

In the first 100 days, Trump averaged less than five claims a day, which would have added up to about 7,000 claims in a four-year presidential term.

As of April 27, including the President's rally in Green Bay, Wisconsin, the tally in the database stands at 10,111 claims in 828 days.

The President's constant Twitter barrage also adds to his totals. He racked up 171 false or misleading claims in just three days, April 25-27, which was more than he made in any single month in the first five months of his presidency.

About one-fifth of the President's claims are about immigration issues, a percentage that has grown since the December 2018 government shutdown, over funding for his promised border wall.

His most repeated claim, 160 times, is that his border wall is being built.

Trump's penchant for repeating false claims is demonstrated by the fact, that the Fact Checker database has recorded nearly 300 instances when the President has repeated a variation of the same claim at least three times.

His campaign rallies continue to be a rich source of misstatements and falsehoods, accounting for about 22 per cent of the total.

According to a Fact Checker report in January, there were only 82 days or about 11 per cent of the time that there were recorded no claims.