According to a report published by the Federation of American Scientists (FAS), China’s second field will be able to house about 110 silos when completed. 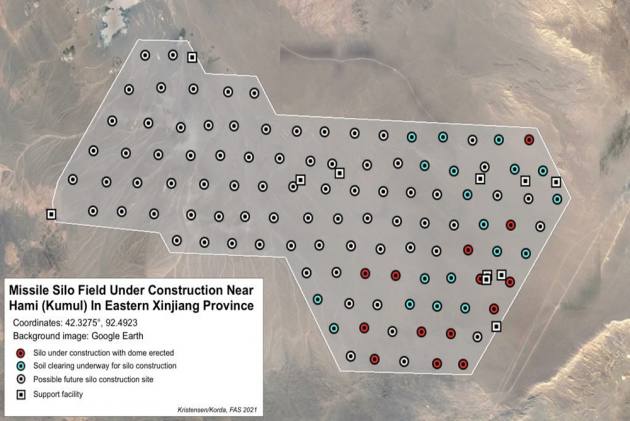 According to a report published by the Federation of American Scientists (FAS), the second field will be able to house about 110 silos when completed.

Citing commercial satellite imagery, the FAS report stated that at least 14 silos in the new field have dome shelters over them and soil has been cleared in preparation for construction of another 19 silos. The grid-like outline of the entire complex indicates that it may eventually include approximately 110 silos, the report stated.

Last month, The Washington Post reported that 120 silos were spotted at a site in a desert area in Yumen, in north-central Gansu province, some 2,100 km from Beijing.

The Hami missile silo field is in a much earlier stage of development than the Yumen site. Construction began at the start of March 2021 in the southeastern corner of the complex and continues at a rapid pace, the report, released on Monday, said.

Previously, some state-run Chinese media outlets dismissed reports of the missile silo field in Gansu, suggesting it was a wind farm.

China's state-run Global Times newspaper earlier this month pointed out that the US has repeatedly raised these issues based on speculative information.

"Their purpose is obvious: to exert public opinion pressure on China's nuclear deterrence building and force China to respond to their speculation.

They aim to hamper China's nuclear capacity building by making an issue of it and putting China in a passive position to defend itself," it said on July 2.

But the FAS report commented that the silo construction at Yumen and Hami constitutes the most significant expansion of the Chinese nuclear arsenal ever.

The report said the creation of 250 new silos would move China out of the "minimum deterrence" category.

"The build-up is anything but 'minimum' and appears to be part of a race for more nuclear arms to better compete with China's adversaries," according to Matt Korda and Hans Kristensen, who wrote the FAS report.

US defence officials have expressed concern about China's nuclear build-up.

In a statement provided to CNN, a US State Department spokesperson described the apparent buildup as "deeply concerning," noting that it raised questions as to China's true intent.

"Despite the PRC's obfuscation, this rapid build-up has become more difficult to hide and highlights how China is deviating from decades of nuclear strategy based around minimum deterrence," said the spokesperson, referring to China by the acronym for its official name, the People's Republic of China.

"These advances highlight why it is in everyone's interest that nuclear powers talk to one another directly about reducing nuclear dangers and avoiding miscalculation," the spokesperson added.