US Urges China To Refrain From Unilateral Action On Taiwan

US Secretary of State Antony Blinken has called on Beijing to deescalate tensions in the Pacific during a meeting with Chinese Foreign Minister Wang Yi. 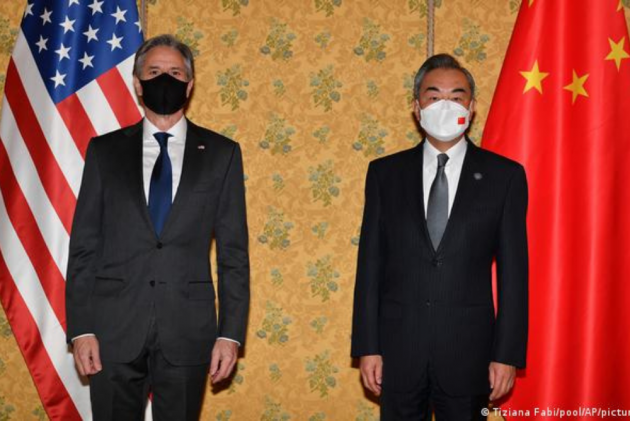 Blinken made the comments to Chinese Foreign Minister Wang Yi during an hour-long meeting on the sidelines of the G20 summit in Rome.

What did Blinken and Wang say during the meeting?

The top US diplomat told Wang that Washington has not changed its "one China" policy towards Taiwan.

Blinken said the US opposes actions by China "that run counter to our values and interests... including actions related to human rights, Xinjiang, Tibet, Hong Kong, the East and South China Sea and Taiwan," according to State Department spokesperson Ned Price.

He also said the US and China can work together on issues such as "the DPRK, Burma, Iran, Afghanistan and the climate crisis."

The meeting comes after President Joe Biden recently said that the US would come to the defense of Taiwan if China attacks the island. The president said US commitment towards Taiwan is "rock solid."

Biden's comments angered Beijing, with Chinese Foreign Ministry spokesman Wang Wenbin accusing the US of "flexing its muscles" in the Taiwan Strait.

Blinken also recently said Taiwan should be more involved with international organizations such as the United Nations, which again led to a stiff rebuke from the Chinese government. China has said it is firmly against Taiwan becoming a member of the UN.

What is the state of US-Taiwan relations?

Washington and Taipei have had substantial but non-diplomatic relations since President Jimmy Carter signed the Taiwan Relations Act in 1979. The act requires the US provide Taiwan with weapons, with the president also ordered to inform Congress if there are any threats towards the island.

Retired Admiral Philip Davidson, the former commander of US Indo-Pacific Command, told Congress in March that China could invade Taiwan within the next six years. He also predicted that China would overtake the US as the world's premier superpower by 2050.