Donald Trump reiterated that he is talking to both India and China about the border dispute. 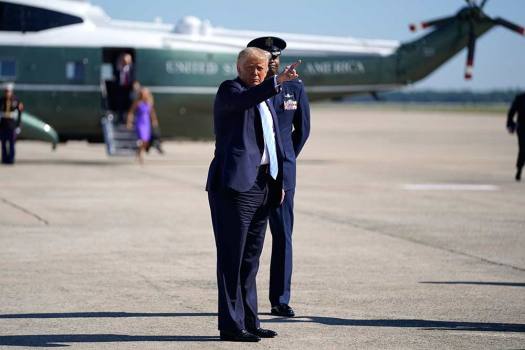 Asserting that the situation along the India-China border has been "very nasty” and the Chinese are "going at it" much more strongly, US President Donald Trump said he would love to get involved and help.

"While we're at it, we're talking about China and India are going at it pretty good on the border, as you know. It's been very nasty,” Trump told reporters on Friday evening at a White House news conference.

Trump reiterated that he is talking to both India and China about the situation.

“And we stand ready to help with respect to China and India. If we can do anything, we would love to get involved and help. And we are talking to both countries about that,” he said.

When asked if China is bullying India, he said that he hoped it is not the case but noted that China is "certainly going at it".

“I hope not... But they (China) are certainly going at it. They are going at it much more strongly than a lot of people even understand,” Trump said in response to a question.

Tensions flared up again in eastern Ladakh after China unsuccessfully attempted to occupy Indian territory in the southern bank of Pangong lake five days ago when the two sides were engaged in diplomatic and military talks to resolve the prolonged border row.

India occupied a number of strategic heights on the southern bank of Pangong lake and strengthened its presence in Finger 2 and Finger 3 areas in the region to thwart any Chinese actions. China has strongly objected to India's move. However, India has maintained that the strategic heights are on its side of the LAC.

Following China's fresh attempts to change the status quo in the southern bank of Pangong lake, India has further bolstered its military presence in the region.

"It was very satisfying to see our soldiers and local commanders in high morale and good health. It gives me confidence that they are well prepared to safeguard the territorial integrity of our nation. The Indian Army is known for its commitment and resolve," Gen. Naravane said.

"We will continue to utilise all existing mechanisms to reduce tension and to ensure that the status quo is not unilaterally changed," he added.